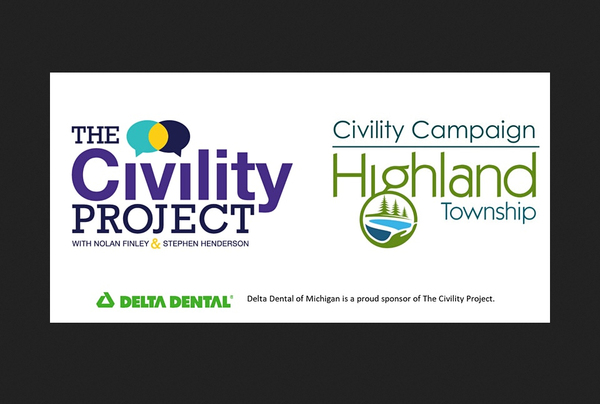 
Two commentators from different ends of the political spectrum came together to share a message of civility and tolerance.

The Civility Project is a series of events that explores how to better have calm, cool discussions with people of differing viewpoints in these highly charged political times. The project is the brainchild of Nolan Finley, a conservative columnist from the Detroit News, and Stephen Henderson, a liberal writer and public radio talk show host. They gathered online, Thursday night with 50 participants for the latest event, which was hosted by the Civility Campaign of Highland Township. Henderson and Finley, despite their often opposing views, are longtime friends who shared the secrets of having civil, respectable discourse with roughly 50 participants on Zoom. These participants broke out into smaller groups at different points of the evening to hold discussions on topics like: What motivates your political position, and what things in your background and value system do you bring to your views?

Henderson talked about the basic principles on how to engage while avoiding animosity, explaining both the art and act of listening. . He said listening isn’t simply not talking while someone else is, but a more deliberate and intentional effort to understand what they are saying. Finley built on this by saying one effective tool to use when someone isn’t listening is to ask them questions about themselves. He says it has a way of softening them up and easing you into a softer conversation.

Henderson encouraged participants to place value on what others are saying, even if you disagree, and commit to the idea that the exchange you are having doesn’t have to define your relationship. Both he and Finley urged people to get to know the people they are having conversations in which there are disagreements. Finley suggested learning about each other and building trust before sitting down to a meaty conversation. He said the goal should not be to “win” the argument or convert the other person, but to learn something from them that can potentially challenge your own position. Finley said he and Henderson, like many people of differing views, want the same common outcome, but have different ideas on how to get there.

For more information on the pair’s efforts, visit www.greatlakescivilityproject.com.