No One Shows For Bond Info Meeting; Superintendent Not Worried 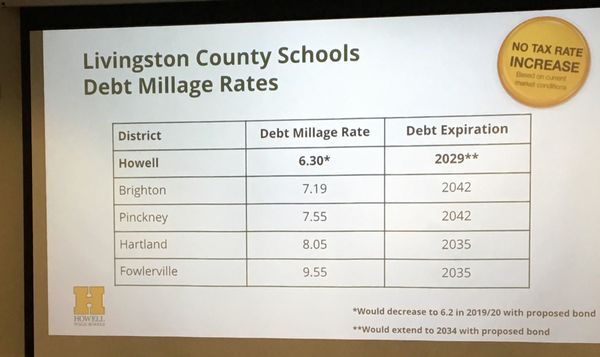 Howell Public Schools officials feel the lack of attendance at an informational meeting about the district’s bond proposal indicates that voters are well-informed about the request.

The forum was held in the district’s Board of Education meeting room Tuesday night, with a presentation prepared to educate community members about the $39 million bond proposal that is set to appear on the May 7th ballot. Despite the fact that the informational public meeting was the last that will be held before the election, there were no community members that attended. But Superintendent Erin MacGregor feels that might not necessarily have negative implications stating, “I do think that represents the fact that we’ve really done all we can to make sure our community is informed." He says there have been tremendous outreach efforts including the community meeting, an executive briefing, and information on the district’s social media pages and website.

If approved, the bond proposal will provide the district with $39 million dollars to fund improvements for each of its 11 buildings. Among the envisioned enhancements are security system upgrades, infrastructure repairs, improved educational spaces, replacement of aging buses, and improvements for some athletic and performing arts facilities. The proposal is not expected to result in a tax increase for residents and the debt levy will decline from 6.3 mills to 6.2 mills. MacGregor also noted that the district has the lowest debt millage in Livingston County and, even with the bond, Howell Schools will be able to pay off their debt before any other districts in the county.

MacGregor feels stakeholders appreciate and understand what the bond would achieve, adding that it’s not very often that the district can come to voters with a bond request that won’t impact taxes. He says the district will continue to provide details about the proposal and encourages any community members that still have questions to contact officials via email, visit the district’s website, or check the district’s social media. You can also learn more about the proposal through the link below. (DK)