New Sidewalk in Brighton Removed by Consumers for Gas Line 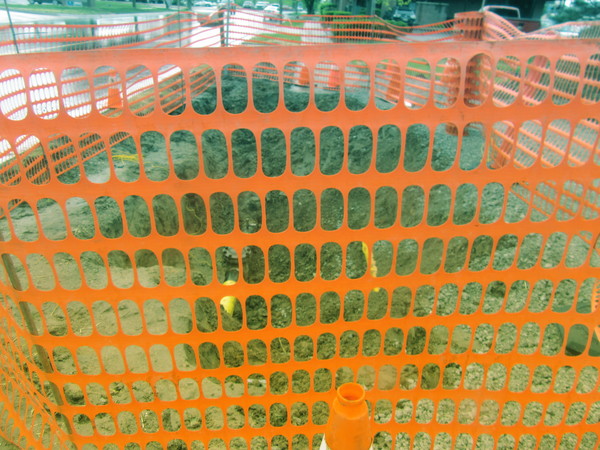 Several sections of brand-new sidewalk on North Second St. in Brighton had to be torn up because of the belated realization by a private utility that a new gas line needed to be installed. As a result, Consumers Energy is installing a new 6-inch natural gas main on the east side of the street to replace the old main on the west side as part of an upgrade to the existing system.

While the updates are in the same area, this work is not directly related to Brighton’s $2 million N. Second St. project that has been financed by the Downtown Development Authority and the city’s utilities fund, which paid for the sewer and water improvements. The project was undertaken to replace aging utilities and increase capacity in anticipation of new development, including a 200-unit luxury townhouse project fronting the Mill Pond and a much smaller townhouse project at the corner of Second and Center streets.

According to Dept. of Public Works Director Marcel Goch, Consumers Energy was informed by the city last year that some issues were discovered with the older services during street reconstruction, so after some repair work Consumers decided to upgrade and replace everything in the immediate area. However, due to scheduling conflicts and design work that needed to take place, Consumers was unable to proceed until after the city’s contractor had completed its work this spring.

Since a new gas line has to be installed at every home or business, including those on the west side of the street, the company will be doing directional boring underneath Second so that the reconstructed street — which was just completed last week — will not be torn up. City Manager Nate Geinzer says that Consumers Energy is responsible for the damage to the sidewalks and the adjacent “greenbelt” area — consisting of mostly grass and sod that had to be removed.

In a spot check Friday, only a few areas were observed where the concrete sidewalk is broken. The concrete was removed by Consumers in order to replace the old gas line at these locations: the corner of Chestnut St., a small amount of sidewalk a couple of blocks further north near the Mill Pond Apts. and the most significant area, just south of Cross St., where a crew has removed the sidewalk and dug underneath to reach the gas main.

Other than that spot, only three small areas were observed where the sidewalk was broken. At those locations, crushed stone has been put in as a temporary measure until it can be replaced with a permanent sidewalk. Goch says the action by the utility, in his words, “is unfortunate, but is a necessity” in order to install the new gas main. He says that installation of the new gas main and the connections to individual homes and businesses should be completed by mid-June, with permanent sidewalk and greenbelt restoration to follow. Goch says he will make up a “punch list” so that when Consumers Energy says the project is completed the city can ensure that everything has been properly restored to its s former condition. (TT)

Photo: A large section of new sidewalk removed by Consumers Energy on N. Second, just south of Cross St. in Brighton, in order to install of a new gas main.