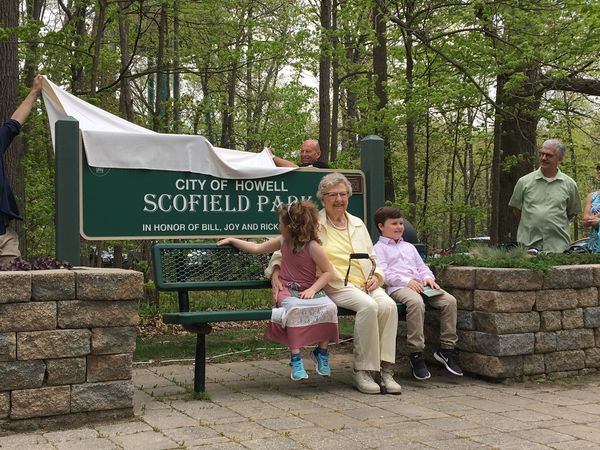 The Howell City Park has a new name to recognize a family for their many years of dedication to the community and efforts to better the city.

A ceremony was held at the front entrance of the park Sunday and attended by local officials, friends, and members of the Scofield family. The ceremony unveiled a new sign for the park’s entrance, still in the same green color scheme as the park’s original sign, but now reads “City of Howell Scofield Park”. The new designation is in honor of Bill, Joy and Rick Scofield’s influence and commitment to the city. Paul Rogers, a member of the Scofield Park Dedication Committee, also revealed two dedication plaques honoring the family that will be placed at different locations throughout the park.

Bill Scofield, who passed away last year at age 89, was on the Howell Recreation Commission for 17 years as well as being a founding member and chairperson of the Livingston County Community Foundation, and a member and chairperson of the Howell Area Chamber of Commerce. His wife of 67 years, Joy, was passionate about the Howell City Library, which later became the Howell Carnegie District Library, and served 22 years on the library board as a member and officer. Rick Scofield has served on numerous boards, including the library’s and the Howell Recreation Commission, and has provided mentorship to over 600 budding entrepreneurs.

At Sunday’s ceremony, Rick reflected on the many memories of picnics at the park, swimming in the lake and skating on it. He thanked the community for the tribute, adding there’s no place the family would rather have lived than Howell. The Scofield’s came to the area approximately 85 years ago. Rick says his father and grandfather would be proud to see how the community has grown, like the Howell Area Junior Baseball Association, which Bill Scofield help create and led in the construction of Bennett Field. Speaking to how much his family has enjoyed being a part of and giving back to the community Rick stated, “…you never know how what you do today could impact tomorrow.” (DK)