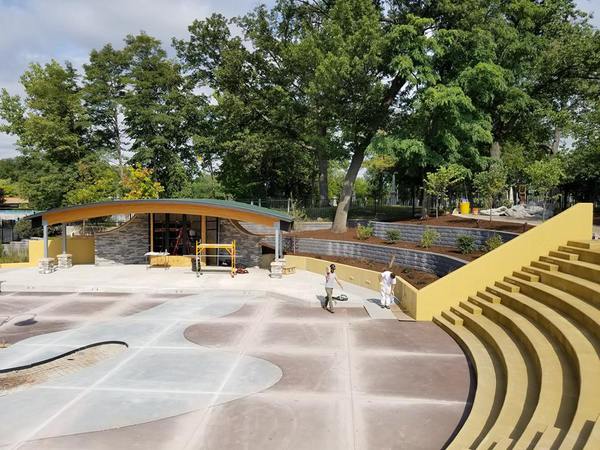 The new bandshell and amphitheater project on the Mill Pond in Downtown Brighton is essentially completed and the amphitheater portion will have a “soft” opening on Nov. 10th as part of Veterans Day events.

City Manager Nate Geinzer tells WHMI the $850,000 project, paid for by the Brighton Downtown Development Authority, is finished except for some “punch list” items. Geinzer says the bandshell, like the amphitheater, exceeded his expectations, and will enhance the ambiance of downtown Brighton. He expects the usage of the bandshell and amphitheater will increase considerably over what it was in the past with the old gazebo and grass amphitheater, which are now gone.

The overall project includes replacing the gazebo area with a bandshell, stage and seating area, along with adding five shade trees, a grassy hillside and native landscaping. Objections were voiced by citizens at meetings last year regarding the project, primarily focusing on the destruction of several mature shade trees. The city replied that although two of the trees are oaks, two others are invasive locust trees, but, as a result of citizen input the plan was modified considerably. The number of trees to be destroyed was reduced to four, and architect Pete Lindhout changed several other aspects, including decreasing the amount of amphitheater space and altering the bandshell colors to softer tones.

Geinzer says a grand opening for the bandshell-amphitheater project will be scheduled for next spring, although a date is yet to be determined. (TT)