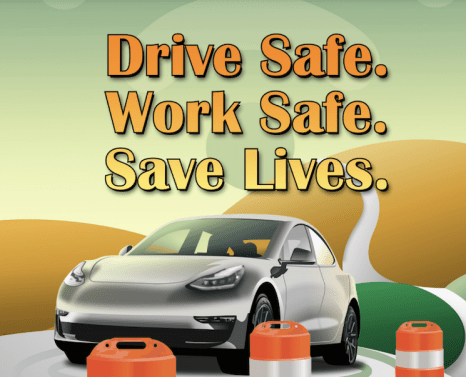 
An annual spring campaign to encourage safe driving through construction zones is underway.

It’s National Work Zone Awareness Week - an annual event that focuses national attention on worker and motorist safety in work zones. The Michigan Department of Transportation is kicking off the campaign and highlighting the theme: “Drive Safe. Work Safe. Save Lives”.

Fall 2020 was said to be a time of tragedy for Michigan’s road and bridge workers. In a matter of three months, five workers were struck and killed and three more were injured in work zone crashes.

MDOT Spokeswoman Courtney Bates says most work zone crashes caused by inattentive or distracted drivers and speeding is the leading cause of fatal work zone crashes. She says their awareness campaign starts at the beginning of spring when MDOT gets going on its big rebuilding and maintenance season, which lasts throughout the summer and fall – sometimes into November and December. Bates says workers just want to come home to their families and loved ones and deserve to work in a safe place.

Bates tells WHMI there are lots of projects planned throughout the state and motorists will notice a lot of orange barrels and cones out on the roads in the coming seasons. She reminds people to put down distractions like phones and food, pay attention to signage and be cognizant of workers - who are sometimes just inches away from traffic where motorists are driving at 50, 60, 70, and 80mph through work zones. She further advises to take extra time, pay attention to trucks coming in and out of work zones and look for brake lights to be able to stop in time to keep workers safe this construction season.

While the annual awareness event has been recognized for more than 20 years; work zone crashes, injuries, and fatalities continue to haunt road workers. Traffic volumes trended down in 2020 due to the pandemic but Bates says preliminary data shows the numbers were pretty substantial. She says traffic volumes were down anywhere from 20% to 60% depending on different times in the pandemic and preliminary 2020 numbers showed 4,900 work zone crashes and 785 injury crashes. Within those, there were said to be 15 fatalities and 69 serious injuries.

As part of the campaign, MDOT and partners are asking the public to “Go Orange” today and show support by sharing a photo of them or their team wearing orange on social media with the hashtags #orange4safety and #NWZAW.