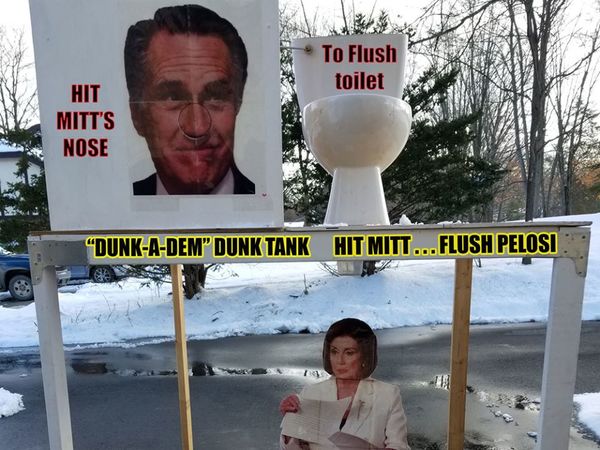 
A fundraiser for a Livingston County commissioner that’s been generating controversy has reportedly not been cancelled; only postponed.

The “Re-Elect Wes Nakagiri” for County Commissioner fundraiser was originally scheduled to take place this evening at the Dunham Hills Golf Club in Hartland; however, Nakagiri says he is “sorry to report that the event has been postponed.” Nakagiri says that the venue informed him that they received a complaint about their “Not-Politically-Correct-Dunk-Tank” that was being used as the theme of the fundraiser. The “Dunk-a-Dem” dunk tank encouraged participants to hit a picture of Republican U.S. Senator Mitt Romney on the nose, which would then “flush” or dump water from a toilet onto a picture of House Speaker Nancy Pelosi.

Nakagiri says initially he was told that there was a scheduling conflict. But during a face-to-face meeting with the Events Manager, it was disclosed to him that there had been a complaint. Nakagiri says the Events Manager viewed the dunk tank as promoting violence or bullying. A similar point of view was expressed by Judy Daubenmeir, Chairwoman of the Livingston County Democratic Party, during the County Commission Meeting on Monday, February 24th. “Any suggestion that we should use violence against our political opponents, even simulated violence, is un-American and a threat to the peaceful conduct of elections that we cherish. The same is true of any attempt to dehumanize our opponents by suggesting we dump urine or feces on them. Republicans can sneer at this as ‘political correctness,’ but I call it simply being polite and decent to fellow Americans with whom we may disagree politically."

In addressing Daubenmier’s concerns, Nakagiri says he indicated that the dunk tank is a way to express disapproval of Romney’s vote to impeach President Donald Trump, while simultaneously expressing disapproval of Pelosi’s shredding of her copy of the State of the Union Address. Nakagiri feels the dunk tank is “not even partisan as Romney is a Republican and Pelosi is a Democrat.” Nakagiri states that the venue offered to hold his fundraiser without the dunk tank, but that he declined. He adds that he “will not knuckle under to political correctness” and will instead “double-down on the theme.” In addition to the cardboard cutout of Pelosi tearing up the State of the Union address, Nakagiri says he plans to make an additional cardboard cutout to sit under the toilet that “perhaps” could be Former FBI Director James Comey, former First Lady Hillary Clinton, or Democratic Presidential Candidate Bernie Sanders.

Nakagiri says the fundraiser will be rescheduled once a new venue has been secured. He adds he will be providing refunds or rainchecks to anyone who sponsored or purchased tickets.