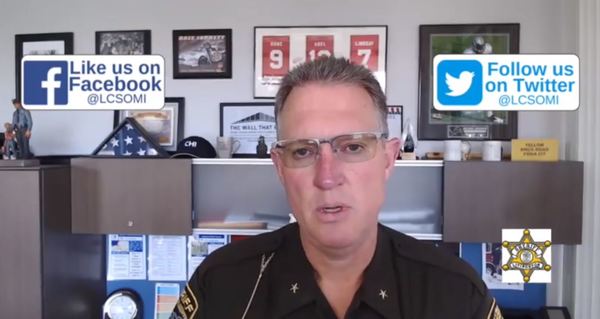 
Livingston County Sheriff Mike Murphy addressed the state of unrest in the country following George Floyd’s death and how he’d like to see area-residents that are upset respond.

Sheriff Murphy took to Facebook Live this afternoon and expressed that he was doing so with a “heavy, broken, and aching heart“ for both the Floyd family and for businesses and communities that have suffered destruction in the wake of Floyd’s death. He added that his heart also aches for the children trying figure out what this world is about in the midst of a pandemic, and for the law enforcement officers that put on the badge and uniform proudly every day. But his heart is angry at both “bad cops“ and the “violent protestors.”

Hearing word of two planned protests in Howell that have since both been postponed, Murphy addressed those wanting to participate and shared his insight of what a protest is. The Sheriff said that a protest assumes there is a side for and a side against, but that “there’s no protest here.” He said that you’re not going to find one person in this world that can justify the actions of the officers in Minnesota. Murphy continued, saying nowhere is it okay to kneel on someone’s neck for nine minutes when they’re restrained. He said, “So there’s no protest; you have 100% agreement with law enforcement.”

Murphy explained that in law enforcement, they do the best they can to hire the best possible people, but as with any profession, race, or religion, they are dealing with human beings and there are going to be bad apples. He said when something bad happens, they need to ensure they deal with it appropriately and he believes that is what’s happening in Minnesota.

Murphy sees his office and other law enforcement agencies in the county as community-active and approachable. He set a challenge to people wanting to have their voices heard to not hold a protest, but something like a unity parade. Murphy pointed to Genesee County Sheriff Chris Swanson and how when residents of Flint wanted to protest, he showed up and walked with them. He said it doesn’t serve any good for people to show up some place with no agenda because “people start talking trash and that’s how things go sideways.” Instead, he invited the community to make it an organized event, with a starting and ending point if it is a parade they want. Or if they want speakers, to give them a venue to speak.

Lastly, Murphy asked people to maintain their composure and think things through. He said we’re all in this together, and asked to let the Sheriff’s Office be there with you and as a part of the planning process.

View a joint statement from the Michigan Sheriff’s Association, which represents Murphy and all 83 elected Michigan Sheriffs, condemning the actions that led to George Floyd’s death below.