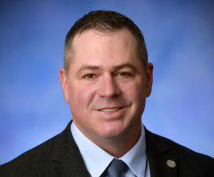 A local lawmaker has introduced legislation he says would boost local road funding without increasing taxes or state debt. However, state transportation officials are expressing their doubts.

State Representative Mike Mueller introduced House Bill 5489 would increase funding for county and city road commissions and decrease funding for the state’s highway fund without increasing taxes or state debt. Mueller said flipping them would give local communities more revenue for roads and also allow for more accountability. Then if the roads are bad, Mueller says people can approach their municipal governments. The Linden Republican added it would actually increase revenue by almost 58% for cities and village to get some of the local roads fixed. Mueller commented further that none of the $3.5 (B) billion generated goes to any of the local roads that many people travel every day –adding not everyone uses the freeway. He added that the roads in larger cities like Detroit and Flint are also in very poor condition once off the freeway. Mueller further stated critics might argue it’s a “robbing Peter to pay Paul” situation, but Peter has been living pretty good since 1951 and it’s time Paul gets a little bit of the money all taxpayers are paying.

On the opposite end of the idea are transportation officials at the state level. Jeff Cranson, Director Communications for the Michigan Department of Transportation, told WHMI that the roads controlled by MDOT, which include state trunklines along with I, U.S. and M routes, carry 53% of the state’s total traffic and more than 70% of all commercial traffic, which he says drives the economy. Cranson says efforts should be focused on a long-term sustainable solution to fund all Michigan roads, both state and local. He added that, “We need to grow the pie before talking about how the pie is divided.”

HB 5489 would specifically amend section 10 of 1951 Public Act 51, which is the formula used for disbursements of transportation funds. The bill was referred to the Committee on Transportation. (JM)