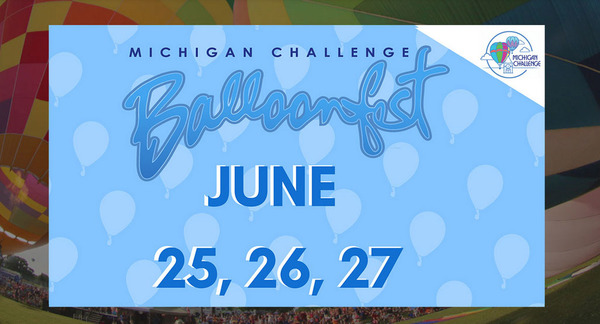 
The Michigan Challenge Balloonfest will float back into Howell this June but with a twist amid the pandemic.

The Howell Area Chamber of Commerce announced that a modified version of the popular event is planned June 25th, 26th, and 27th. There will not be any big festival at the event site to avoid large crowds but other activities, hot air balloons, and live video feeds are planned of pilot interviews, take-offs, and landings. The weekend will feature four flights with balloon launches taking place around the Howell area and flying over the downtown area.

The event is the state championship of hot air ballooning and 24 pilots will be competing with flights planned on Friday evening, Saturday morning and evening, and Sunday morning - all weather permitting.

Chamber President Janelle Best said given the current situation, they really have no idea what to anticipate and that planning for such a large festival really needs to start 12 months in advance. She says an event of such magnitude with all kinds of people coming and congregating, even though it’s outside, would still be a lot of people. With another surge in COVID-19 cases, especially in Livingston County, Best told WHMI they wanted to make sure they could provide something that’s safe for the community.

Best said the main goal is to keep the community and pilots engaged and impact the local economy in a positive way. She says what they’ve designed is something they’re hoping can still have the atmosphere and hot air balloons but then look to do creative pop-up entertainment or things downtown where people can safely social distance but still support local eateries, merchants, and retailers. Nothing is finalized yet for the pop-up events but Best said they are also talking with some event partners such as Howell Main Street, the Downton Development Authority, and Howell Area Parks & Recreation Authority on some collaborative effort for that Saturday.

Both volunteers and sponsors are being sought. Best says they’re really leaning on sponsors to help bring the event back to the community this year, given they won’t have any additional revenue coming in from a physical event. She says they’ll be working with sponsors to help cover expenses, which will be critical for its success this year and the ability to bring it back next year. Best says hopefully in 2022 they’ll be able to host the full-fledged traditional balloon festival that everyone loves but they wanted to do something this year to keep the community engaged and hopefully contribute to the local economy.

Best said they’ll try to live feed as much of the event as they can via the Michigan Challenge Facebook page and at www.MichiganChallenge.com. Updates regarding the event and a complete list of downtown activities will be made available on the event website once confirmed.