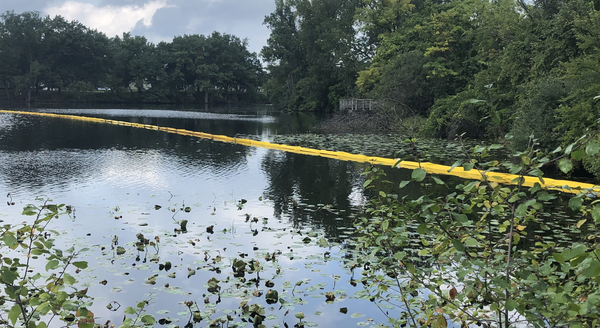 
Cleanup up efforts are nearing completion after a fuel spill in the Brighton Mill Pond.

The incident occurred August 24th when approximately 1,200 gallons of diesel fuel spilled while unloading a tanker at Corrigan Oil’s facility on Second Street. While about a thousand gallons were contained on-site, 200 gallons made it into the Mill Pond through the 2nd Street storm drain.

Officials say that the drains were cleared and booms deployed immediately after the spill, with a larger skimmer deployed by cleanup contractors. Since the time of the spill, Corrigan Oil has employed a 24/7 drone system to monitor the conditions, among other measures.

Hugh McDiarmid Jr., Communications Manager for the Michigan Department of Environment, Great Lakes & Energy (EGLE), told WHMI that staff reports they believe the response is being handled appropriately based on what they saw after an inspection on Friday morning. He says they’re continuing to monitor the situation and the booms are staying in place to capture any residual fuel sheen.

However, a picture posted to the NextDoor app showed a duck in the Mill Pond reportedly with oil on its head. It’s not known when the picture was taken and attempts to reach the person who posted it have been unsuccessful. There have also not been any other reports of affected wildlife, and McDiarmid says drone footage of the area taken Friday morning showed that nearly all of the product has been removed.

Corrigan has been doing routine drone footages of the pond to be sure that the downstream areas are clear of sheen. They also added an additional aerator to the pond to help break up any existing sheen. The aerator was being left in place to help decompose any sheen that may be caught in vegetation, although the whole bank and vegetated shore has been sprayed and rinsed followed by sorbent pads multiple times.

The cause of the spill remains under investigation by EGLE, which may also impose a fine depending on the outcome.