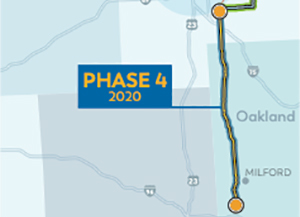 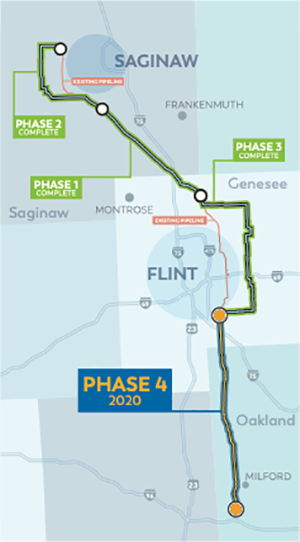 An open house in Milford tonight will detail pipeline project construction that will be starting up in the spring.

Consumers Energy will be starting construction on Phase 4 of the Saginaw Trail Pipeline Project, which started in 2017 to modernize natural gas infrastructure. It’s a large project replacing 78 miles of gas transmission pipeline in Saginaw, Genesee and Oakland Counties with 94 miles of new pipeline. The extra mileage is in urban areas around the Cities of Flint and Saginaw. 12-inch and 16-inch pipeline dating back to the 1940’s is being replaced with new 24-inch pipeline. Construction on Phase 4 will start in early May go through the end of October. Work will be completed from Grand Blanc south to Maple Road in Milford Township totaling approximately 29 miles. The upcoming phase will require work in an approximately three mile stretch of Kensington Metropark as well as some surrounding areas and will result in temporary and periodic trail closures in the project area. Consumers Energy has been working with Huron-Clinton Metroparks and Milford Township staff to coordinate project details. There will also be intermittent traffic impacts where the pipeline crosses the road but signage will be up and flaggers will be present at certain locations.

Project Manager Damian Wetzel tells WHMI they’ve been collaborating with Huron-Clinton Metroparks and municipal officials to try to identify the best way to de-conflict activities in the Metropark and with construction. He says an open house is planned later today, specifically for the Huron-Clinton Metropolitan Authority and Kensington Metropark users. Wetzel says they’ll have different representatives available to answer any questions the public and Metropark users might have including construction and design, the environment or the project schedule as well as any concerns. Wetzel says people will absolutely notice the project, although it doesn’t necessarily go down roads like other construction. He says it’s a gas transmission line and for the most part they’ll be crossing roads, which is what most people will notice. Wetzel noted that every single person and property owner where the pipeline crosses has been contacted. He added they’re also working carefully to protect the environment and local wildlife. Wetzel says they’ve completed a detailed environmental inventory of the project area – including all wetlands, drains and stream crossings – and will work with applicable federal, state and local agencies to consider all environmental concerns. A special pollinator mix is also being used to restore the more than 125 acres of wild and wetland areas where new pipeline was buried to create new habitat for butterflies, bees and other pollinators.

Today’s open house will be held from 4 to 7pm at the Milford Senior Center on Atlantic Street. Anyone with questions about the project is asked to call (800) 647-8101 or email SaginawPipeline@cmsenergy.com. Wetzel says voicemails left on that number and emails go directly to him and leadership and they will respond as promptly as possible. A link to more information about the project is provided. (JM)