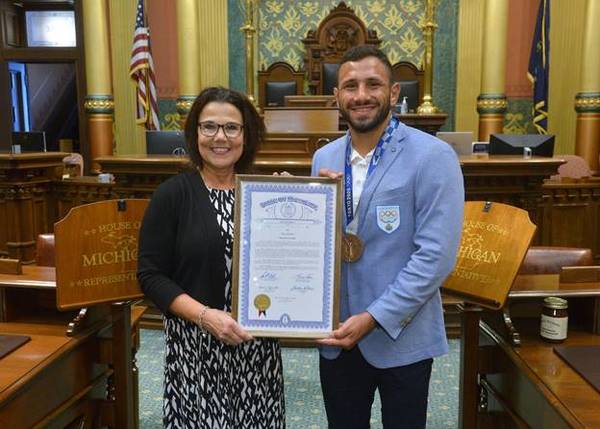 
A Brighton-man who medaled in the Tokyo Games was in Lansing and recognized by a local lawmaker.

Miles Amine, of Brighton, is on the national wrestling team for the small nation of San Marino, and won a Bronze medal last month during the Olympics, in the 86-kilogram freestyle event. It was the first-ever wrestling medal for the tiny, land-locked country with about 34,000 people that is located in north-central Italy. When he received the right to represent San Marino, Amine lost his eligibility for representing the U.S. in international wrestling competitions.

On Wednesday, he was in Lansing and met with State Representative Ann Bollin of Brighton Township. Bollin presented the 24-year old with a state tribute and recognized him during House Session. She said, in a release, that very little has stopped him from achieving his goals, and that Amine “always sets the bar very high to perform his best and reach the next level.”

Off the mat, Amine is a graduate of the University of Michigan Ross School of Business and a four time Academic All-American.