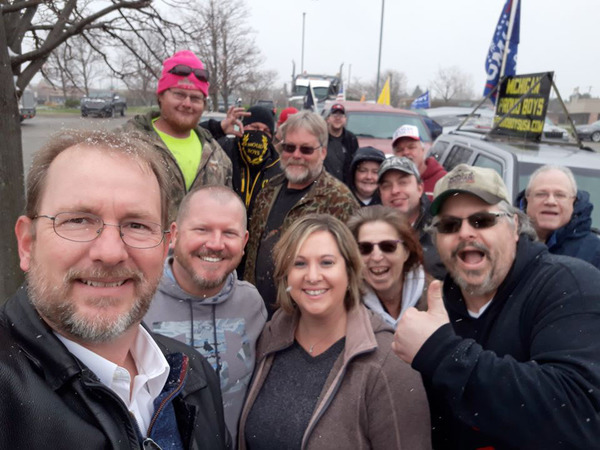 
A local congressional candidate is defending a picture he took and posted on social media that has since gone viral.

Republican 8th Congressional District candidate Mike Detmer of Howell gathered Wednesday morning with supporters in the Art Van Furniture parking lot in Genoa Township before heading to a protest in Lansing. “Operation Gridlock” was being held to protest Governor Gretchen Whitmer’s executive “Stay Home, Stay Safe” orders to keep people at home and non-essential businesses closed during the coronavirus outbreak. A picture from Detmer’s Facebook page showed him taking a selfie with about a dozen people, including an individual wearing a Proud Boys face mask, flashing a recognized white power symbol. A vehicle with a large Proud Boys sign on top of it was also in the photo. None of the other individuals in the photo were wearing masks. Proud Boys has been described as a far-right neo-fascist organization that admits only men as members and promotes political violence, although the group itself insists it has not, and will not allow white supremacists into their ranks, nor any other ethno nationalist group member. The Southern Poverty Law Center says the group’s leaders “regularly spout white nationalist memes and maintain affiliations with known extremists. They are known for anti-Muslim and misogynistic rhetoric. Proud Boys have appeared alongside other hate groups at extremist gatherings like the "Unite the Right" rally in Charlottesville.” However, a Proud Boys spokesperson says they reject that definition by the Southern Poverty Law Center, noting that they are currently suing the organization. “The SPLC has no authority to label anyone and has recently lost similar high profile cases and had to pay out large sums as a result.”

The photo has since gone viral and generated much controversy, mostly centered on the lack of social distancing among the group and the lack of wearing a mask, but also the fact that he posed with the Proud Boys and posted the picture. Detmer has since responded to say that there were hundreds of vehicles assembling in Howell to join the caravan and waiting for it to come though. Detmer tells WHMI he is not familiar with the man wearing the mask or the group, saying he thought the man was making an “ok” symbol in the background. He says he didn’t ask the man to be in the photo, there was just a group of people around his vehicle so he asked that they jump in for a quick selfie. Detmer said he has no idea who the individual or the group is or if it a white supremacist group. He further asserted that he did not notice the signage on the van and was just taking pictures, adding everyone received word at the last minute that their line-up was going to change so it was pretty chaotic. When asked if he would disavow the group, Detmer stressed they have nothing to do with his campaign and he knows nothing about them, adding he’ll have to do some research. Detmer said he didn’t want to disavow anyone because it could just be slanderous material. He said maybe they are and maybe they’re not but they are certainly not part of his campaign.

As for the disregard of social distancing guidelines, as evidenced by the lack of masks and people gathered closely together, Detmer defends that everyone was wearing masks – they just took them off for the photo. He said everybody was keeping social distancing but there were a lot of people that got out of their vehicles to find out what was going on. Detmer said most people were keeping to the six foot rule and wearing masks and gloves, although none can be spotted in the photo other than the man wearing the Proud Boys mask. He says he asked them to come in for a quick selfie, it was a quick in-and-out shot, the masks went back on and away they went.

Detmer said there were a lot of “patriots” at the gathering concerned with what’s going on and this was history in the making so he doesn’t make any apologies whatsoever for taking the photo and if people didn’t want to be part of that they wouldn’t have. Detmer added having this kind of firestorm from the photo is part of politics but he is in no way associated with any hate group or anything along those lines and has friends and supporters of every different race.

You can hear the full interview that Mike Detmer did with WHMI's Jessica Mathews through the link below.