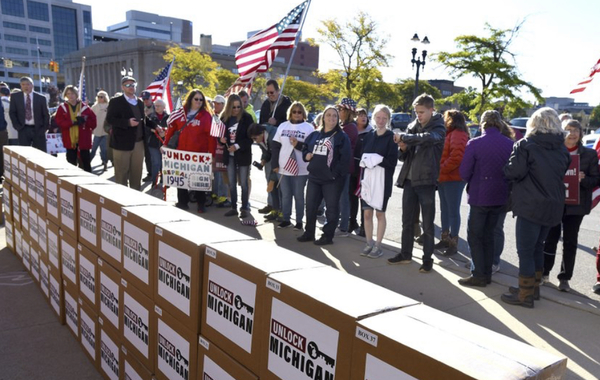 LANSING, Mich. (AP) — The Michigan Supreme Court on Friday struck down months of orders by Gov. Gretchen Whitmer that were aimed at preventing the spread of the coronavirus, saying she drew authority from a 1945 law that is unconstitutional.

The decision is an extraordinary development in a monthslong conflict between Whitmer, a Democrat, and the Republicans who control the Legislature and have complained that they’ve been shut out of major orders that have restricted education, the economy and health care.

Coincidentally, the court’s opinion emerged on the same day that Whitmer’s critics submitted more than 539,000 signatures in a bid to repeal the 1945 law.

For six months, the governor has imposed — and subsequently eased — restrictions on Michigan’s economy, K-12 school system, health care and even visits to state parks, all in an attempt to reduce the risk of the highly contagious virus, which has killed more than 6,500 residents.

Republicans said Whitmer should have used a 1976 law, which gives lawmakers a say in any emergency declarations after 28 days.

“That act is an unlawful delegation of legislative power to the executive branch in violation of the Michigan Constitution,” Justice Stephen Markman wrote. “Accordingly, the executive orders issued by the governor in response to the COVID-19 pandemic now lack any basis under Michigan law.”

Justices nominated by the Republican Party joined the majority opinion.