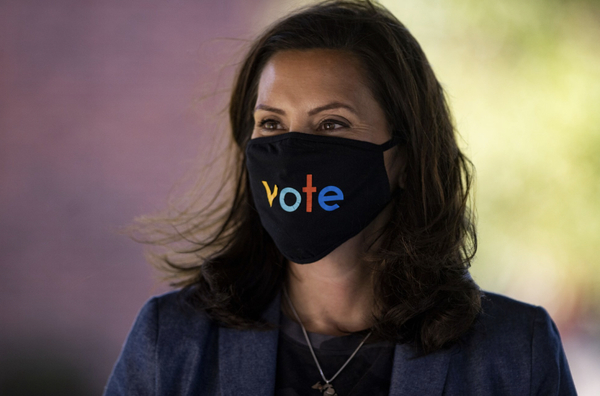 LANSING, Mich. (AP) — The Michigan Supreme Court on Monday rejected Gov. Gretchen Whitmer’s request to delay by 28 days the effect of its decision striking down a law she had used to keep intact sweeping orders designed to curb the spread of the coronavirus.

Justices voted 6-1 against halting the precedential effect of its Oct. 2 opinion until Oct. 30. They also reaffirmed their initial 4-3 ruling that declared the 1945 emergency powers law unconstitutional, this time in a lawsuit brought by the Republican-led Legislature.

Executive orders issued under the law “are of no continuing legal effect. This order is effective upon entry,” the court wrote.

Whitmer, a Democrat, had asked the justices to give her administration, lawmakers and local health departments 28 days to transition in the wake of the major decision. Her administration last week quickly reinstituted mask requirements, gathering limits and certain business restrictions with pandemic orders issued by the state health department under a public health law whose origins date to the 1918 flu pandemic.

Legislators and Whitmer are negotiating legislation related to other orders negated by the decision, including an extension of unemployment benefits to 26 weeks from 20 weeks. Other bills would let public bodies meet electronically, extend driver’s license renewal dates during a state of emergency and retroactively shield health providers from coronavirus-related lawsuits filed by patients.

Locally, Livingston County Administrator Nathan Burd sent out an email to commissioners saying due to the ruling, Tuesday night’s meeting of the board will be no longer be a remote-only meeting and instead be a “hybrid” gathering that will require at least five commissioners to be present in the board room for a quorum. One of the issues to be decided is a resolution from Commissioner Wes Nakagiri that would eliminate the mask mandate inside county facilities. The resolution would have no real effect, however, as the Michigan Department of Health & Human Services has since issued a mask mandate for public spaces under the public health code.

Whitmer, echoing calls from plaintiff’s lawyers, said Monday the House should reverse the Senate’s decision to tie the unemployment measure to bills that would make it harder to sue businesses over COVID-19 infections. Republicans have said the legislation would block frivolous complaints and give businesses more comfort to reopen.

She said jobless benefits “hang in the balance” because of the Supreme Court decision.

“While the Legislature has to play an important role, I’m hopeful they’ll break that tie-bar so I can sign it into law and we can fix this posthaste,” Whitmer said.

One reason there has been confusion after the ruling is because it reached the Supreme Court in an uncommon way. A federal judge overseeing a lawsuit that makes state and federal claims about Whitmer’s powers asked for an opinion on the constitutionality of two laws related to gubernatorial emergency powers.

The Supreme Court answered but did not issue a judgment or order. On Monday, it ruled in a similar case filed by the GOP-controlled House and Senate and said in an order that the decision is effective immediately.

“While today’s motion affirmed that the court’s decision is now law, the governor is continuing to sidestep the ruling by maintaining unilateral control over pandemic policies via broad and poorly defined powers granted to a state department,” said Patrick Wright, director of the Mackinac Center Legal Foundation, which helped bring the federal case that got to the Supreme Court. “We are currently looking at the legality of the governor’s latest actions.”

Robert Gordon, director of the Michigan Department of Health and Human Services, has said the law gives him a “broad grant of authority” to act to control a pandemic.