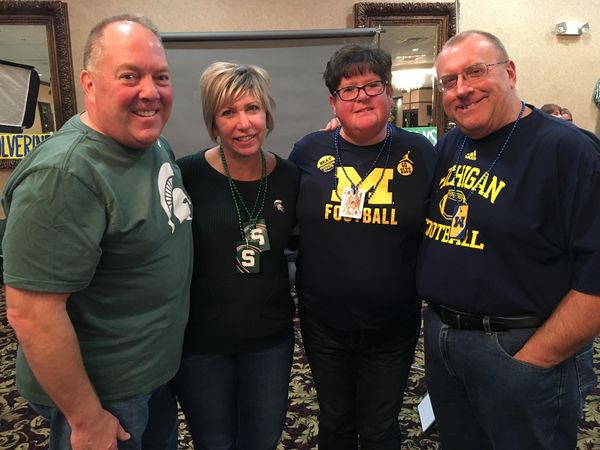 Michigan and Michigan State fans went head-to-head at a benefit for a charitable dentistry, but it was the Spartans that took home the win with a little help from undeclared fans.

The annual VINA Community Dental Center’s Tailgate was held Thursday night at Crystal Gardens Banquet Center in Genoa Township in anticipation of Saturday’s game. The yearly event pits Michigan’s rival teams against one another to see who can raise the most funds for the VINA Dental Center, which provides affordable dental care to Livingston County residents with limited finances. The winner of the yearly contest/fundraiser is the side that donates the most to VINA in the time leading up to and throughout the event. Livingston County Sheriff Mike Murphy and local writer Buddy Moorehouse co-emceed this year’s party and served as team captains, with Murphy leading the Spartans and Moorehouse representing the Wolverines.

Murphy tells WHMI the night began a little shaky for his team as they came into the event about $5,000 in the hole. There was, however, a pot of money set aside for guests who didn’t care which team their donations went to. During the event, Murphy and Moorehouse competed for that undeclared fan money with a cornhole tournament. Murphy and his partner won the game, “just barely” according to Moorehouse, giving MSU an approximately $10,000 boost for the win.

All bitterness aside, Moorehouse says he’s glad to be a part of something bigger than the rivalry adding, “The idea behind this fundraiser is so phenomenal…and to be able to come out here and show support for our school and also show support for the VINA Dental Clinic, which is an incredible organization, it’s just a phenomenal night. We’d be here supporting our team no matter what but to be here to support VINA is just fantastic.”

Murphy says he obviously expected a Spartie win at the fundraiser, even if it was achieved with the neutral money. He had high praises for both VINA and his team stating, “Vina, just what a great charity and what a great ministry they do providing dental services for folks who are financially burdened and can’t afford it. Happy to be a part of it, happy to support the cause, but more happy that the Sparties won.”

The final amount raised by each team is yet to be tallied to include any additional donations made after the call. Whatever those numbers may be, Murphy says for all intents and purposes, his team clearly won. (DK)