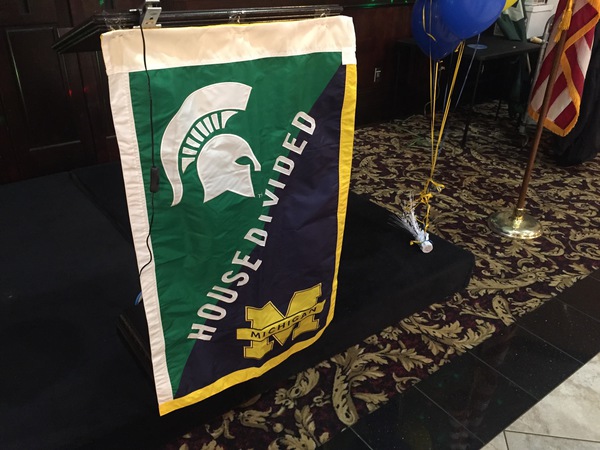 Wolverine fans helped Michigan grab a win prior to Saturday’s big game at an annual fundraiser benefitting a local dental clinic that serves those in need.

The 10th annual VINA Dental Tailgate was held at Crystal Gardens in Howell Wednesday night, pitting Michigan and Michigan State fans against one another to see which team’s fanbase is more charitable. The winner of the yearly contest is the side that donates the most to VINA in the time leading up to and through the event.

Livingston County Sheriff Mike Murphy was the emcee of this year’s party and announced Michigan’s fans had raised more by “quite a lot”, though the final numbers won’t be calculated for a few days still. Murphy says while Saturday’s game will have a winner and a loser, the tailgate party does not because it’s all about raising money for a good cause like VINA. The clinic was established in 2008 with a mission to provide quality, affordable dental care to individuals with limited finances and little to no access to dental care.

Noting Livingston County’s location directly between Michigan and Michigan State University, Co-Founder Dr. Fred Bonine says fans came to the tailgate to support their respective institutions, but more importantly, they came to contribute to local residents in need. Speaking of VINA's patients Bonine says, "They’re the working poor for that matter and they have the same teeth that everybody else does with the same problems and because of VINA, they have someplace to go."

With VINA’s 10th anniversary held just last month, Bonine says they have much to celebrate, including the approximately 18,000 dental appointments provided over the last decade, and generating $5 million in dental care for patients. (DK)