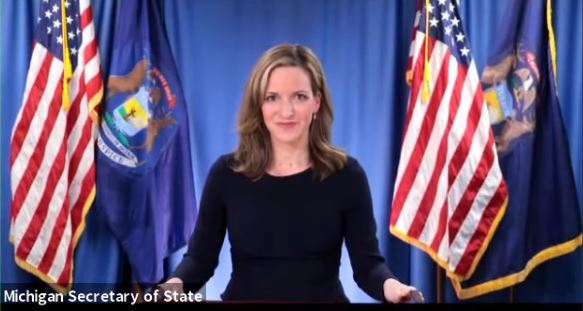 
Democratic Michigan Secretary of State Jocelyn Benson has announced a legislative agenda she says will ensure fair and secure elections following a huge increase in absentee voting and unfounded accusations of voter fraud in the November General Election.

Michigan had its highest-ever voter turnout in 2020 with about 5.5 million votes cast. Nearly 30,000 citizens registered to vote on Election Day itself. Benson hosted a press conference Monday afternoon and said her administration has launched the most aggressive post-election audit process in state history and there is no evidence of wrongdoing but there are still legislators that seek to roll back access to the vote.

Benson said across the country, legislative leaders are trying to make it harder to vote in person and impossible to vote absentee. She says they claim it will restore faith in the elections when the in fact the only voters who have lost faith are those who believed the lies about the elections that those same leaders either told, amplified, or allowed through their silence to go uncorrected.

Specifically, Benson is proposing the following:

*Mandate ballots postmarked by Election Day and received shortly after are counted;

*Make Election Day a state holiday to facilitate voting and make it easier for citizens to serve as election workers;

*Prohibit open carry of firearms within 100 feet of a voting location;

*Mandate training standards for election challengers and election workers; and,

*Require a statewide risk-limiting audit of election results prior to state certification.

Meanwhile, one local lawmaker and former clerk weighed in on Benson’s comments. Republican State Representative Ann Bollin of Brighton Township released a statement after the Secretary of State announced her legislative goals for the year, saying that election integrity is her, "top priority heading into this year, and I’m committed to leading the way in restoring the public’s trust by improving our elections process." She went on to say that Secretary Benson "has only demonstrated an interest in partnering with legislators who happen to be members of her own political party" and that if the goal is bipartisanship, "I can’t imagine why she would continue to bring up emotionally charged policy proposals that have already been struck down by our courts. Our focus must be on improving transparency, protecting election integrity and restoring the public’s trust – not on constitutionally questionable proposals that advance the Secretary of State’s own political agenda".