Pond Hockey Classic Is Back On 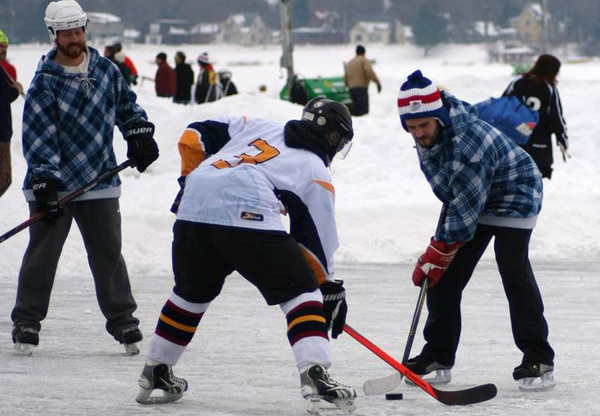 An annual pond hockey tournament that was in danger of being cancelled is back on firm ice after organizers and authorities met to hash out safety concerns from the local chief of police.

Thought to be cancelled just a couple of weeks ago, the 2019 Michigan Pond Hockey Classic will indeed be taking place as originally scheduled on Whitmore Lake this February 8th through the 10th. At the December 11th meeting of the Northfield Township Board of Trustees, organizers were denied their civic application after failing to meet Police Chief William Wagner’s request to put a snow fence around the event. Wagner, who said he supported the event, also stated that it had become too difficult to police in its current state. Disappointed with the Board’s split-decision to support the chief, organizers withdrew their application, leaving many to believe the tournament would not take place. However, last weekend several board members, organizers, and Wagner met to discuss what needed to be done to make sure this event which brings in 2,000 skaters from across the U.S. and Canada takes place.

Northfield Township Marlene Chockley said she is thrilled they got the fence situation worked out. To her understanding, she says, there won’t be a snow fence, but there will be a light barrier fence to help delineate the area.

Now that the agreement has been reached, team and volunteer registration for the event is open. Sponsorship opportunities are also available. For more updates on the event, to register, or to sponsor, visit www.mipondhockey.com. (Photo-Facebook) (MK)