Michigan Officials Plead For Ventilators, People To Run Them 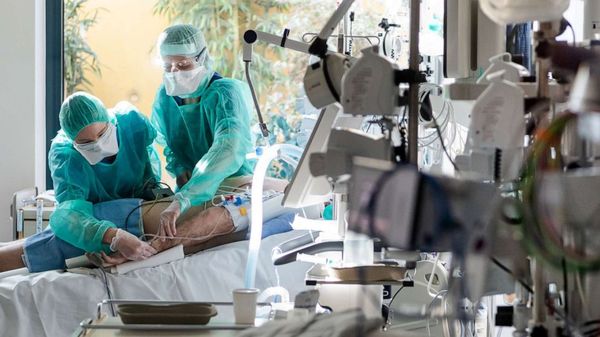 
Michigan desperately needs thousands of ventilators to treat victims of the coronavirus and more health care workers willing to pitch in during the crisis.

The number of coronavirus cases reported statewide reached 6,498 Monday, an 18% increase, while deaths rose to 184 from 132. In Livingston County, there are 64 confirmed cases and two deaths. Michigan has 1,700 ventilators — critical equipment to help people breathe — but Dr. Joneigh Khaldun, the state’s medical executive, says the state needs 5,000 to 10,000 more. The Federal Emergency Management Agency sent 400 due to arrive today. The state is procuring 2,000 from other sources, but Gov. Whitmer says there will be a shortage of those to operate the machines and treat the patients that are on them. “That’s going to be a pressure point. That’s precisely why we’ve called out to people who have perhaps retired from the medical field to consider coming back. That’s why we’ve made it easier for people to join the front lines.”

For most people, the coronavirus causes mild or moderate symptoms, such as fever and cough that clear up in two to three weeks. For some, especially older adults and people with existing health problems, it can cause more severe illness including death.

TCF Center in downtown Detroit soon will be turned into a 900-bed field hospital for COVID-19 patients who are not critically ill. A health expert says Detroit has become a hot spot for coronavirus cases for a number of reasons that include the city’s high poverty rate. Khaldun said health care workers in areas that are not hard hit could travel to hot spots in southeastern Michigan. Whitmer signed an order allowing hospitals to be flexible in how they use medical professionals. Mayor Mike Duggan said Detroit is getting testing kits from Abbott Laboratories that can confirm the coronavirus in minutes instead of days. They will be used on paramedics, police and health care workers.

Meanwhile, Ford Motor said it will start making ventilators in late April at a factory in Ypsilanti. It expects to produce 50,000 by July 4.

The governor, who is expected to extend a stay-at-home order and other restrictions at least through April, suspended all nonessential veterinary procedures and encouraged veterinarians to use telemedicine. On Sunday night, Whitmer urged county jails to consider early release of older inmates, those with chronic conditions and people nearing their release date, all to reduce the spread of the virus.

Whitmer, who signed $150 million in emergency funding to fight the pandemic, said President Donald Trump authorized up to 3,000 National Guard members to do humanitarian work in Michigan.

All Michigan schools have been closed since March 16. Whitmer, who has said it is “very unlikely” that schools will reopen, said she will publicly talk about the rest of the school year this week.