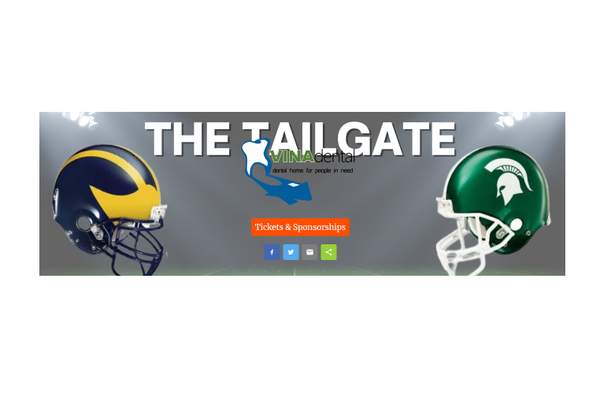 New auction items have been added to the VINA Tailgate fundraiser that may be of particular interest to fans of the Maize and Blue.

The Tailgate is the dental clinic’s signature fundraising event where fans and alumni of both Michigan and Michigan State compete for bragging rights over which base is more generous. Spartan fans have “won” the event 7 out of the 12 times it has run, including each of the last 3 years.

A new incentive, however, has recently gone live that may help the Wolverines break their losing streak.

A mini online auction is running until September 30th for 3 sets of tickets to Wolverine games at Michigan Stadium. Fans can now bid to see the Maize and Blue against Northwestern on October 23rd, Indiana on November 6th, and the Ohio State game on November 27th. Each game has 4 tickets up for auction.

Bidders can designate their team as “Michigan,” “Michigan State,” or “Neutral” when placing a bid, so even Spartan fans who want to surprise a Michigan fan in their life with tickets can participate.

This year’s Tailgate will be held on Wednesday, October 27th, at Crystal Gardens in Genoa Township. Tickets and sponsorships are still available for purchase online, or at the clinic’s Brighton location. For more information, visit vinadental.org.