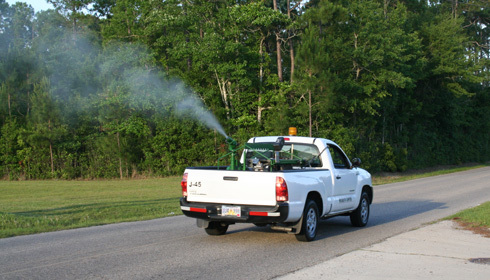 
Livingston County residents and others across the state are being advised of scams around mosquito treatment and applications.

After an explosion of mosquito populations across the state, many people are said to be turning to pesticides to combat the annoying pests. The Michigan Department of Agriculture and Rural Development (MDARD) is advising the public to avoid falling victim to scams and illegitimate businesses and to only hire licensed mosquito control companies.

MDARD Communications Director Jennifer Holton tells WHMI they’ve had about five complaints statewide since the initial announcement regarding uncertified or unlicensed pesticide applicators offering some sort of mosquito control service. She says that’s marginally on par with complaints from other years but commented they have heard some anecdotal reports about “someone rolling up on a scooter offering to spray yards” – which is probably not the best plan.

Holton said they just felt that given mosquitos seem to be coming out in force; it’s a good time to let people know that applicators must be certified or registered and any sort of pesticide application firm must have a valid license to legally apply pesticides for a commercial purpose.

Holton says they further want to make sure companies know what they’re doing, are following the law and using pesticides according to the label - noting in Michigan, the label is the law. She encourages people to do their research and learn what to look for when hiring a mosquito control company.

A list of companies licensed to control mosquitoes in Michigan and more information can be found through the provided link.