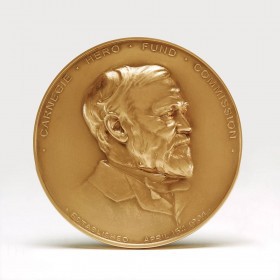 A Howell man is being honored for his lifesaving actions last summer.

Michael Rodriguez, a 54-year-old carpenter, is being honored by the Carnegie Hero Fund Commission for saving 45-year-old Matthew Harris of Howell from drowning during an incident last July. The Commission was created to recognize outstanding acts of selfless heroism performed in the United States and Canada. Rescue acts are said to be carefully evaluated, investigated and reported to the Commission for decision. The Carnegie Medal is then awarded to those who risk their lives to an extraordinary degree while saving or attempting to save the lives of others.

Harris had suffered a medical problem while driving and his vehicle went off the highway, into a 9-foot-deep retention pond. Rodriguez witnessed the incident and pulled over, as Harris was inside the vehicle and unresponsive. Despite being a poor swimmer, Rodriguez dog-paddled out to the car and with the help of bystanders, was able to maneuver the car toward shore. Rodriguez opened the driver’s side door and used a pocket knife to cut the seat belt and free Harris as the car sank, during which he became submerged. Rodriguez grasped Harris from behind and removed him from the submerged vehicle and swam him toward shallow water near shore where bystanders were able to assist them from the water. Harris survived and was not injured but Rodriguez was said to be nearly exhausted and aggravated a previous shoulder injury but has since recovered.

Livingston County Sheriff Mike Murphy tells WHMI it’s an awesome story in which Rodriguez witnessed an accident and took it upon himself to save a life, which is why he’s being recognized as a hero by the commission. He says it’s also a great story of humanity doing the right thing but especially in the public safety world where people can get a little bit jaded and cynical from seeing people at their worst and what they do to each other, which is kind of crazy sometimes. Murphy says this story really just restores faith in humanity because Rodriguez took it upon himself to stop and didn’t just drive by and leave it to someone else to call 911. Murphy says Rodriguez stopped and didn’t hesitate to actually jump in and do the right thing so hats off to him and they’re all proud.

Rodriguez now joins a class of Carnegie Heroes and is among the awardees to be presented with the Carnegie Medal at a gala in June in Pittsburgh. He could not be reached for comment by WHMI. (JM)