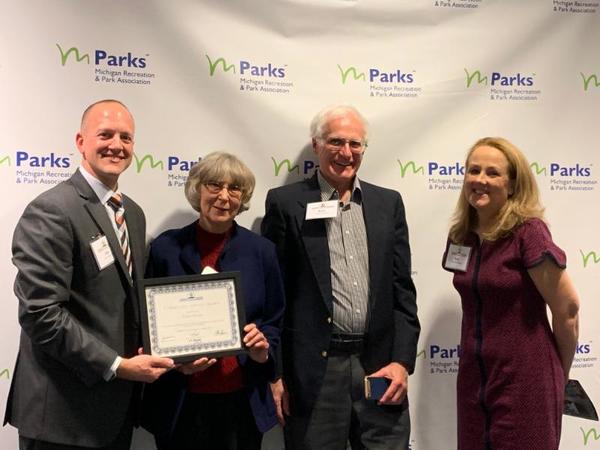 A longtime volunteer has been recognized for her work within two local Metroparks.

Huron-Clinton Metroparks announced that three of their regular volunteer groups were awarded mParks Volunteer Service Awards during a ceremony Wednesday night. Nominees and staff traveled to Lansing where mParks awarded Toni Spears, CRAMBA and Beyond the Seed Greenhouse & Gardens for their committed service to the Metroparks. Officials say Toni Spears has been a long-time volunteer for the Metroparks, contributing thousands of hours of service to the Natural Resources department removing invasive species since 2017. In 2018, Toni volunteered over 500 hours removing invasive species and helping with land management at both Hudson Mills Metropark and Dexter-Huron Metropark. Because of the strategic plant management and the countless hours of hands-on work Spears has done, officials say they proud to have the main woods area of Dexter-Huron Metropark filled with desirable and exciting wildflowers – adding it is exceedingly rare to have such a vast natural area virtually free of invasive species in southeast Michigan.

Volunteers contribute upwards of 28,000 hours per year to the Metroparks and officials say there are a variety of opportunities for those interested to get involved, year-round. Details can be found through a link below. (JM)