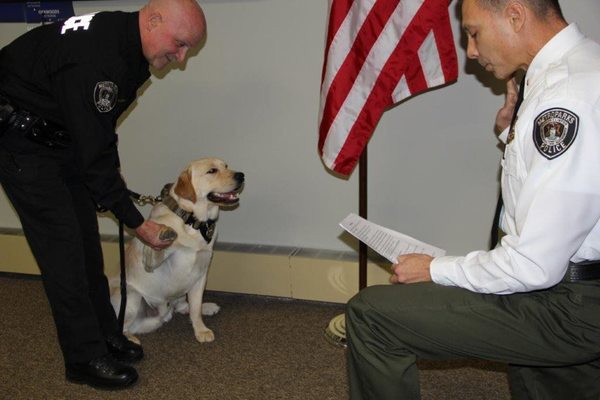 The newest member of the Metroparks Police force was sworn into office this week, although it was a paw and not a hand that he had to raise to take the oath.

Officer Parks made his debut as the newest furry addition to the Huron-Clinton Metroparks Police Department back in February 2019. But on Thursday at the December Metroparks Board of Commissioners meeting he was awarded his training diploma and sworn into the department as an official Police dog. Officer Parks is joining the force as the first Metroparks Police Dog. His new position includes being an ambassador for the Metroparks and fostering positive interactions with the police department.

But that’s not his only job. Parks and his handler, Officer Green, recently attended training where Parks became certified in tracking and explosives detection. He also graduated first in his class for obedience. Parks’ training and status allows him to work in combination with his Officer Green to conduct police activities. The courts recognize this for criminal prosecution and civil litigation purposes. He is also required to receive additional training on a regular basis to maintain this status. He will sometimes travel to assist other police departments when a need for his special services arises.

Metroparks Chief of Police, Michael Reese says that besides assisting in the law enforcement aspect, Parks will provide a nice bridge between the police and Metropark patrons. (JK)