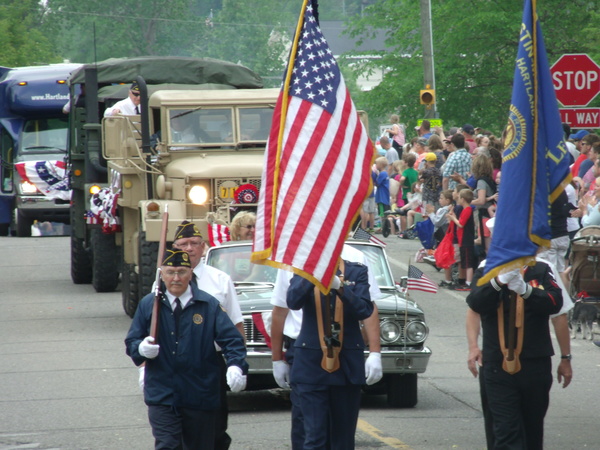 In Brighton, the Memorial Day parade steps off at 10am at Brighton High School and moves down Main Street to the Mill Pond where a ceremony is planned at the Brighton Veterans Memorial. That will be followed by a ceremony at the Old Village Cemetery for a Civil War Veteran Headstone Rededication for Brighton’s Private Charles Pease.

In Howell, the American Legion Deveraux Post 141 Memorial Day Parade will depart from the Howell Carnegie District Library, also at 10am. The parade will travel east on Grand River with stops at the Revolutionary Monument and the Veterans Monument at the historic Livingston County Courthouse for the laying of the wreaths. The parade will then proceed north on Barnard Street to the Lakeview Cemetery for the final wreath to be placed at the Civil War Monument. 10am parades are also set in Hamburg and Fowlerville.

The county’s largest parade is in Hartland, which will kick off with a classic aircraft flyover at 11:30am. Then following a moment of silence at noon, the parade will head out from Ore Creek Middle School and proceed along Hartland Road before ending at Village Elementary School. Paul Scheidler, a veteran and Hartland High School Social Studies teacher, is the 2019 Grand Marshal.

And then finally, Pinckney’s Memorial Day parade is set for 1pm. (JK)