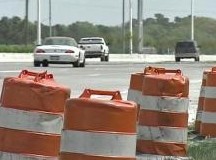 
The Michigan Department of Transportation is suspending work and lifting traffic restrictions wherever possible this Labor Day weekend to ease congestion and increase safety for holiday travelers.

Beginning at 3pm Friday and continuing until 6am Tuesday, 83 out of 147 road and bridge projects statewide will have lane restrictions removed. While motorists will see suspended operations in most MDOT work zones for the weekend, drivers are advised that equipment and certain traffic configurations may remain in place, like temporary shifts or shoulder closures. MDOT reminds drivers to slow down, buckle up, stay alert and avoid distractions in work zones.

One project is ongoing in the Fenton area and has involved lane and ramp closures at Silver Lake, North and Torrey Roads. While work will mostly be suspended, there will be lane shifts on US-23 at Silver Lake Road.

MDOT Spokeswoman Jocelyn Hall told WHMI they make every effort possible to support commuter traffic that relies on north/south routes to get up north for the weekend. She says the Labor Day holiday weekend is really the last weekend they make a concerted effort to stop as many projects as possible and remove lane closures to make it easier for commuter traffic because they know it’s a really busy weekend. That being said, Hall said it’s still frustrating for people who have been commuting through the area on a daily basis and running into lane and ramp closures Monday through Friday. She says unfortunately, they’ll continue to deal with it after the holiday weekend when additional lane closures will be put into place.

Hall noted that after Labor Day is when some of their restrictions loosen up a little for when they allow contractors to work and the number of days and hours they’re allowed to be on the roadway. She says people will see the project continue to kind of ramp up after Labor Day because the contractor will have little more flexibility to get some work done outside of the hours they normally would.

More information and a list of work zones that will remain active or have lane restrictions during the holiday weekend are available in the provided link.