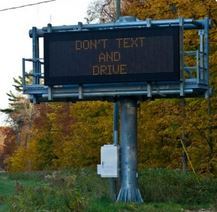 That’s according to the Michigan Department of Transportation, which spoke with two academics studying the effect of safety messages on driver behavior.

MDOT officials say traffic safety engineers and advocates are constantly thinking of creative ways to get the message across and they’re frustrated with the number of people still dying on roads with everything that’s been done to make roads and cars safer. Those include developing new technologies such as auto-braking and lane assist and vehicle infrastructure communication.

Joshua Madsen is a professor of accounting and behavioral economics at the University of Minnesota. He talked about a research report he co-authored that examined whether electronic signs on freeways displaying the toll of traffic deaths reduce crashes.

Jerry Ullman, a senior research engineer at the Texas A&M Transportation Institute, discussed how he first encountered the messages while driving and was struck by the starkness of the numbers, prompting him to wonder about the context and how the numbers were derived.

A link to the full Talking Michigan Transportation podcast is provided.