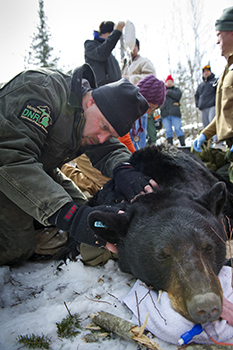 
With firearm deer season wrapping up, any Livingston County hunters who may have noticed a bear den are being encouraged to report it.

The Michigan Department of Natural Resources is asking hunters and others who spend time outdoors to keep an eye out for bear dens while in the field. If one is found, the location should be reported to the DNR to help with an ongoing bear management program.

The DNR is looking for locations of denned bears in the northern Lower Peninsula to grow a surrogate sow program that places orphaned bear cubs with mother bears. After locating a bear den, DNR wildlife biologists will determine whether the animal is a good candidate to join the program and, if so, will fit the bear with a radio tracking device.

The DNR reminds that it is illegal to disturb or harm a bear or bear den.

Officials say that those who think they have found a den should report it and allow DNR biologists to further investigate.