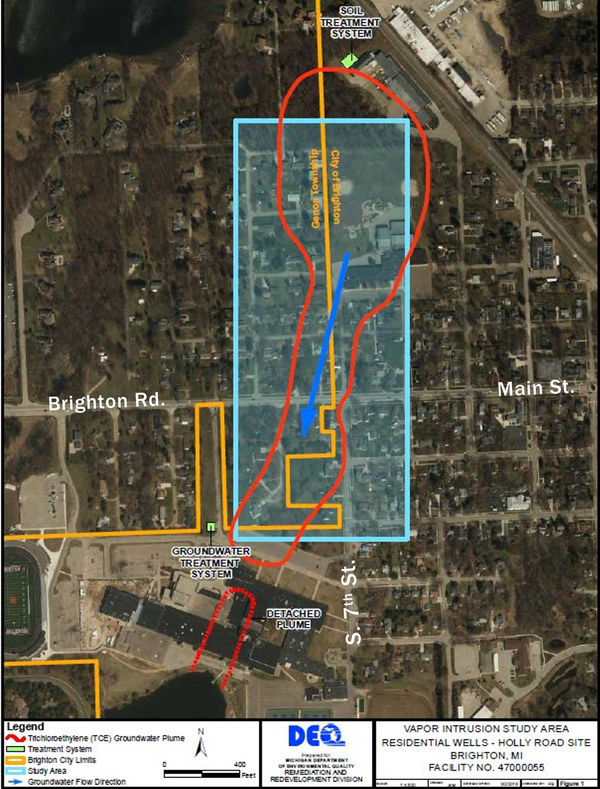 Expanded testing is being conducted to determine if potential vapor intrusion from a contaminated site has spread.

The Michigan Department of Environmental Quality has been monitoring a chlorinated groundwater contamination plume emanating from property located at 525 North Fifth Street in Brighton. Elevated levels of Trichloroethylene, or TCE were identified years ago in the groundwater. The potentially impacted properties are in a defined area on the west side of Brighton, where the city and Genoa Township meet, somewhat between the old Lindbom Elementary School and Brighton High School, which is not impacted. There are now new state screening standards for vapor intrusion, which occurs when vapors from volatile chemicals in contaminated soil or ground water migrate through subsurface soils and/or preferential pathways to impact the indoor air quality of any overlying buildings or homes.

To date, over 40 homes have been looked at. But officials say 60 others are scheduled to be tested. MDEQ Representative Rebecca Taylor says five of the initial 15 homes were found to have indoor air issues and mitigation or radon systems have been installed successfully and test results showed no trace of the chemical. She says it’s an ongoing investigation that involves a lot of work, as five to eight homes are tested each week. Testing is being conducted in the footprint of a large plume. Taylor says it’s mainly a 100-200 feet buffer zone to the west, which had some contamination issues in the 1990’s. The area is roughly from Dillon to State Street to Brighton Road and Taylor anticipates the testing will stretch into May. Taylor tells WHMI people get the impression this is a huge problem but it’s not something affecting the whole town, really just a restricted area of homes sitting on top of the groundwater plume. Although the MDEQ has been conducting aggressive testing, Taylor noted that radon is actually more potent than TCE and many homes have never been tested for it. The solution for TCE is basically the same as a radon system and she encourages anyone with health concerns or living in a radon area to test for it.

Meanwhile, a second investigation of potentially toxic air in homes is reportedly underway in another neighborhood near Whitmore Lake Road, northwest of Lee Road in Green Oak Township. That’s allegedly coming from the former Haigh Manufacturing property, where AIRman Products is located.