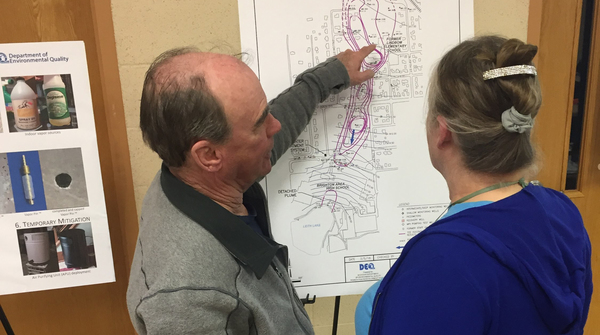 The Michigan Department of Environmental Quality says it’s continuing its investigation into a chemical vapor intrusion that could be affecting residents in the City of Brighton and Genoa Township.

About 70 community members attended an informational meeting Tuesday held at the Brighton Community Center and led by DEQ officials. The DEQ reached out to anyone whose property may be impacted by a groundwater contamination plume that originated from improper chemical dumping at an old industrial site on North Fifth Street in the City of Brighton. Attendees were briefed on the history of the contamination, what has been done to mitigate the problem and how the department is proceeding.

The plume undergoing treatment by the DEQ extends approximately 2,500-feet south of the property that the contamination originated from. Recent developments concerning exposure to trichloroethylene, or TCE, have led the DEQ to re-evaluate vapors emanating from the plume in surrounding residential areas.

In continuation of the investigation, DEQ officials say they may be requesting access to evaluate the vapor intrusion of a home. If indoor air levels are found to be of concern, an air purifier will be brought in as a temporary measure and a vapor mitigation system will be installed in the home’s lowest level. The air will be tested after the installation to ensure any TCE vapors are mitigated to safe levels.

The DEQ says it expects to complete its investigation sometime this year. (DK)