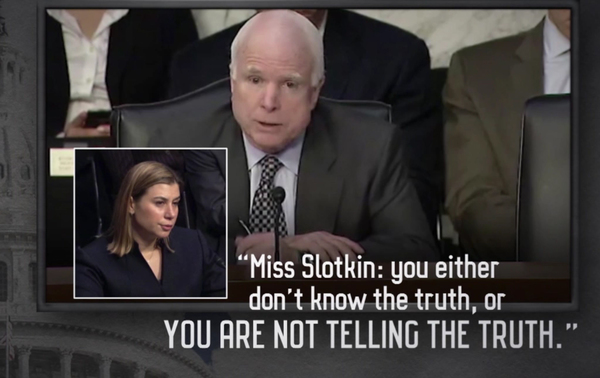 The family of the late John McCain says it is 'disappointed' with a recent television ad being used against two Democrats, including Elissa Slotkin, who is trying to unseat 8th District Republican Mike Bishop.

According to Politico, Rick Davis, a family friend and former top adviser to the late Arizona senator, said McCain's family was disappointed that his past comments are being "weaponized" in the ads airing just weeks after his death. On Wednesday, the National Republican Congressional Committee released two TV ads featuring clips of McCain criticizing Democratic candidates in the past. One was used against Arizona Democrat Ann Kirkpatrick. The other showed McCain criticizing Slotkin, a former official in the Bush and Obama administrations, while she testified before a Senate committee in 2014. The ad featured McCain telling her she "either (didn’t) know the truth, or you are not telling the truth." A source close to McCain's family told Politico that the House Republican campaign committee did not reach out to McCain's family to seek approval to use his comments. McCain died in late August following a battle with brain cancer. A spokesman for the NRCC declined to comment on the ads, saying the content spoke for itself. WHMI asked Stu Sandler, a consultant for the re-election campaign of Mike Bishop, to comment on the criticism about the ad being used against Slotkin, but has yet to receive a response. However, Sandler has several times in the past, and as most recently as Wednesday, referred to the McCain comments in attacking Slotkin, including sending out a YouTube clip of the late Senator’s remarks.

The Slotkin campaign has previously commented on the use of McCain's remarks, calling them "a page out of a tired playbook, and show that despite nearly twenty years in politics, Rep. Bishop doesn't actually have a strong record to run on." (JK)