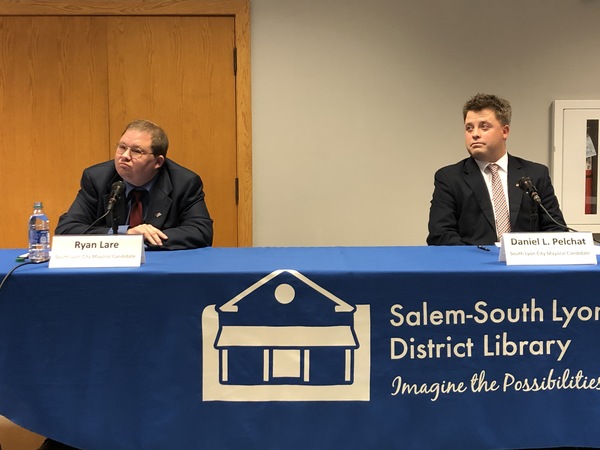 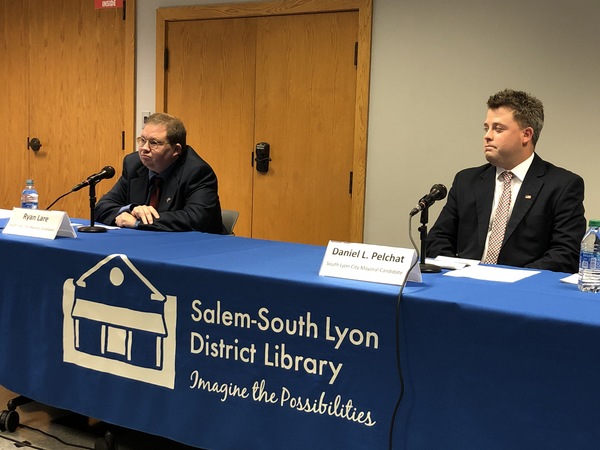 The two candidates for mayor of South Lyon took part in a candidate forum in front of residents.

Pelchat, a 2001 graduate of South Lyon High School, won a 7-candidate write-in election for mayor 2 years ago. When asked further about his background, he said he has some community college, attended and graduated from Specs Howard School of Media Arts, and has worked in South Lyon Community Schools for 20 years as part of the tech department. Additionally you can hear him as the public address announcer for the South Lyon Lions.

Lare has lived in South Lyon for 19 years, served on his student council in high school where he helped set policies, and has spent 25 years taking care of his significant other and mother who has multiple sclerosis and was recently diagnosed with Alzheimer’s. He said he additionally has 3 years of customer service experience at McDonald’s.

The candidates first answered the same 3 questions they were given in advance as the city council candidates were given for their forum earlier in the week. When asked how he would set goals for the city manager, Lare said that was one of his top priorities. He said they need to make sure they are being fiscally responsible and that they are bringing tax base into the city. Pelchat said the City Manager and City Council have a hand-in-hand relationship and that the time to really focus on setting goals is during budget sessions, though it should be open for consideration all year.

When asked how they would respond to residents seeing their community in a negative light, Lare said that you can’t change things from happening and it’s how you handle those curveballs that’s important. Pelchat noted that they have taken steps to fix that problem, including the creation of the city’s Board of Ethics. He said that council members disagreeing on issues can be great as long as everything is “kept above the table” and that there is no room for taking shots or personal attacks.

The candidates were asked why they thought they would be the better mayor. Pelchat said that 2 years ago he stepped into the role amidst a city that was desperate for leadership, and that they’ve put themselves in a position after these 24 months that he is incredibly proud of. He said he sees the city as being on the cusp of “great things.” Lare said that to him, it’s not about being better and that while he has no complaints with Pelchat, he thinks with his tools and the relationships he has with department heads, that he can get a lot accomplished.

South Lyon residents with Wide Open West Cable can see a replay of this forum and the City Council forum over the next week on Channel 19, along with it being posted on the library’s Facebook page.