"Politics As Usual" Coming to Brighton This Weekend and Next 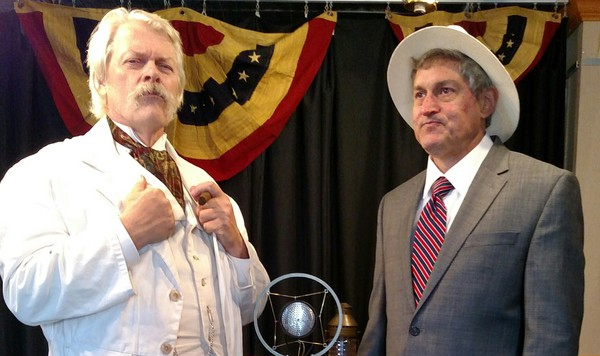 Stretch your imagination and picture Mark Twain and Will Rogers being time travelers and coming to the 21st Century. They meet and become engaged in a conversation about American society and American politics in the bygone era, and compare it to politics in the present day. Not surprisingly, they conclude that little has changed since those earlier times.

That’s the premise of the production “Politics As Usual” which is showing beginning this Saturday (Oct. 13th). The main characters are Pat Tucker, reprising his role as Samuel Clemens - better known as Mark Twain - and Mark Meyer as Will Rogers. The producer is Susan Tucker-Judd and the director is JoAnn Radelt. The moderator is WHMI’s Tom Tolen.

The show was previously presented by the Livingston Players two years ago, and it was decided to update it in time for the 2018 mid-term general election on November 6th. The other difference from the previous production is that it will be in a new location this year – the Lion’s Club building on West Main St. at the railroad tracks in Brighton. The CoBACH Center, where the production was staged previously, is temporarily closed for maintenance. Pat Tucker, as Mark Twain, tells WHMI this year's fall election and passage of the 19th Amendment giving women the right to vote are why the Livingston Players decided to present an updated version of the show.