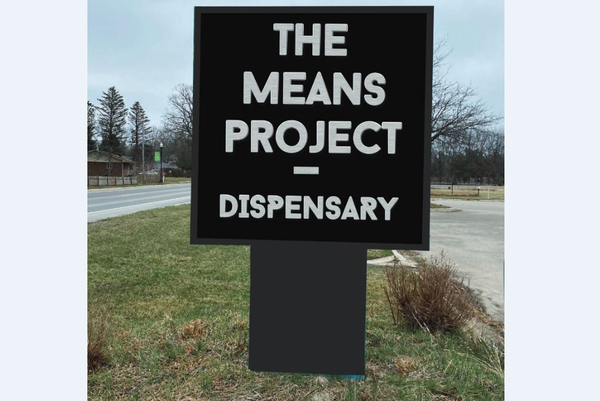 
A proposed marijuana retail establishment in the Village of Pinckney is moving through the preliminary approval process to potentially be granted business licenses.

Applicant/Property Owner Chris Bonk was before the Planning Commission at a virtual meeting held Monday night. He’s proposing “The Means Dispensary” project at 935 West Main Street/M-36. The property includes two parcels totaling approximately 14.5 acres that includes the former Pinckney Elementary School building, parking area, athletic fields, and open spaces. The two parcels would remain separate for now but could potentially be split down the road and a buffer could be required. Only the west portion of the site would be developed for the proposed project.

The first step in the process is securing special land use permits. Three separate public hearings were held on each request, which included a grower Class C license, processor license, and retailer license. A couple of residents spoke in support of the plans and said it was a great opportunity for the community and another had questions surrounding smell. Other individuals involved with youth substance prevention and education groups spoke, saying they recognize marijuana is coming to Pinckney but the hope is that the Village can be mindful about how it will affect youth and do in the safest and responsible way possible to protect youth.

Village resident Krista Harlan said she grew up in an environment where all drugs were bad all the time but since the local ballot petition was initiated, she’s had some hard education and there are a lot of public misconceptions. Harlan commented that the industry is going forward and she feels a small town like Pinckney could benefit from a new industry opening up if done responsibly as others suggested. She felt there is also a lot of room to educate people about the product from both the medicinal and recreational sides.

It was noted that this is not just a retailer but a mixed-use proposal, which Bonk felt will prove to be more successful in the long term. He commented that the cost of cannabis is at a higher number currently but that will most likely start coming down as more dispensaries open. Bonk said having his project being vertically integrated with processing and the retailer all in the same building allows it to be competitive – adding he thinks it’s a great design for success and a good plan to stay in business long term. He further commented that they take youth education and prevention very seriously and encouraged the individuals who spoke to reach out to him, adding they plan to support the non-profits on an ongoing basis if fully approved.

The property was conditionally rezoned in January from R3 or high-density residential to Research-Technology-Office District. It was stated the applicant is in compliance with the master plan and zoning district and the proposal was compatible with the residential character of that part of the Village. The existing building would be preserved with an addition constructed and innovative stormwater management practices incorporated. There was said to be plenty of parking on-site and a fence would be installed, along with an extensive security system with cameras and motion sensors that would be manned 24-7. Odor control was one concern raised and Bonk relayed that a state-of-the-art HVAC system with air clearing technology will be installed with a goal of having zero odors coming from operations.

Some conditions would include adding a unique gateway feature along the M-36 corridor to mark the entrance to the Village and keep with Pinckney’s ongoing branding efforts. That will be subject to future negotiations. Pedestrian access from M-36 to the rear of the property by Honey Creek and the Mill Pond is also being proposed.

Around 26 people attended the meeting. Chairman Tom Pais thanked everyone for taking the time to share their views, saying it was a good group of speakers and they’ve had multiple discussions on the subject but this was their most well-attended meeting.

It will be a competitive process as to how the licenses are granted in the Village. The Village opened up the application process in April. The application window closes June 30th to be followed by an application review and a scoring period that starts in July. Pre-qualification approval from the state is required and all applicants need to show that they have started the process with the state. Pre-qualification must be achieved by September 29th. License recipients will be notified on September 30th.

Various documents related to the project can be accessed on the Village website. That link is provided.