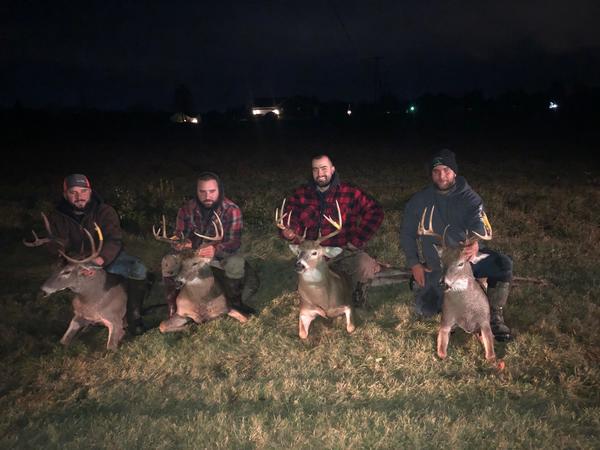 
A group of four friends recently took the woods separately in different areas of Livingston County and within a couple of hours, all had managed a deer kill.

It’s bow-hunting season and what happened is definitely not the norm, according to Marcel Goch of Gregory. He said his 26-year-old twin sons were out hunting on Sunday night and the weather was terrible. He says one son came back excited to announce a take, and not long after his other son came back to report the same. Goch says they then messaged their two friends and couldn’t believe they had the same experience.

Goch, who is the DPW Director in Brighton, told WHMI they were only out for about an hour or so and shot within an hour of each other. He says it was unusual and he thought it was great to see four friends all get a buck the same night and thought people would like to hear some positive news given the current atmosphere with COVID-19 and the election - noting there’s a lot of sportsmen in Livingston County. He added that for all of them to get a shot at something on the same night and the size they all did is pretty rare.

The four had been hunting on property in the Gregory area, an area by Burkhart Road, anther in Fowlerville and somewhere south of Howell. The take included one 8-point buck, one 9-point, one 10-point and one 12-point.

Goch says his boys have been hunting since they were kids and first allowed to hunt – noting they’ve grown up to really enjoy the sport with friends, the trash talk and the outdoors. He says it was exciting to see them all do so well, especially on a day when the weather was just horrible. He says it just goes to show that “you gotta go out, if ya want to get a good one”.