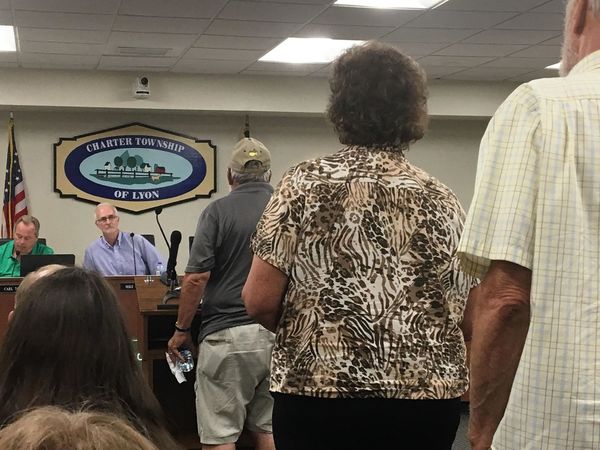 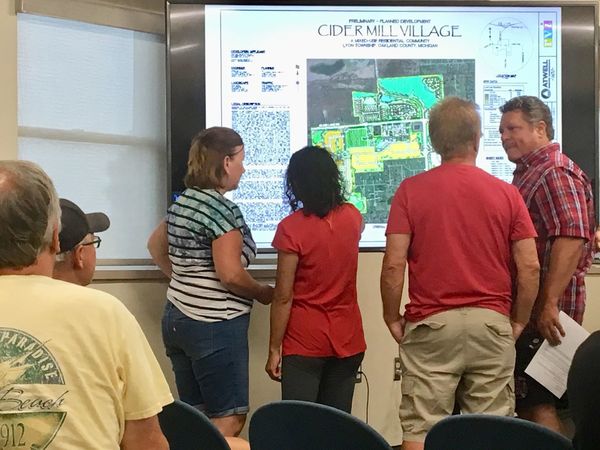 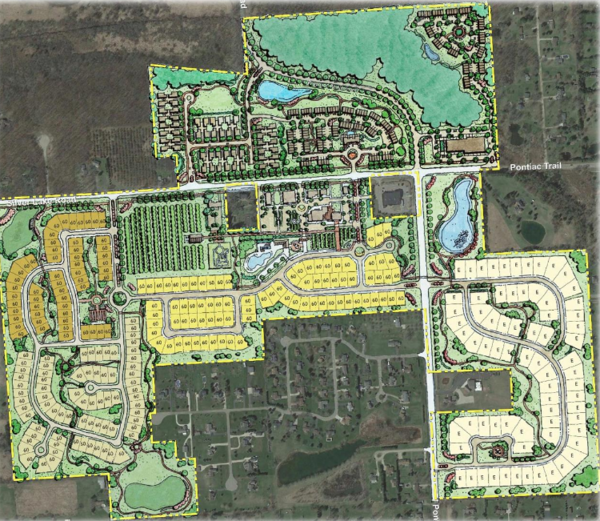 Plans for a proposed development on Erwin’s Orchards in Lyon Township were not only rejected by residents, but the township’s Planning Commission as well.

The Planning Commission held a public hearing Monday regarding a preliminary review of the Cider Mill Village proposal from applicant and developer Pinnacle Homes. The project is proposed on land currently occupied by Erwin Orchards and would consist of multiple types of housing with a total of 490 units, as well as space for retail, a village center, recreation center, preservation area and preservation of a portion of the existing apple orchard. Pinnacle Homes had previously submitted plans in the conceptual stage of the process that received opposition from township officials and residents, with the majority of concerns being density and traffic. At that time, the Board of Trustees made numerous suggestions and recommended that the applicant return with revised plans.

But at Monday’s meeting, a report from the township’s planner and engineer indicated that the proposal as submitted was insufficient as it lacked numerous components and information officials needed for consideration. Township Engineer Leslie Zawada says some of the main issues she found in her review were that the proposed retention and detention basins would not meet the engineering standards so that would require revisions to the layout. She adds that the applicant also requested a revision to the sanitary sewer master plan, which would have to be considered by the Board of Trustees.

Several members of the Planning Commission expressed frustration that the “insufficient” plans even came before them, with Vice Chairman Carl Towne stating he was "floored" by the vague information. Board Liaison Patricia Carcone said it’s “unacceptable” and told Howard Fingeroot, President of the project team, that she had never seen a preliminary plan in such a “rough state”. She noted that the plans failed to depict sidewalks, and that the team didn't complete the tree inventory or screening for all neighbors. Speaking of the proposal Carcone tells WHMI it "...shouldn't have been brought to the Planning Commission", and adds that she thinks it was a disservice to the public.

Still, the public hearing was held, with residents packing the room and even spilling into the hallway. Every resident that spoke during the hearing said they opposed the project, citing concerns including density, potential for increased traffic, and a decrease in their property’s value. Stephanie Pierce, along with several others, noted that allowing the development would be a significant deviation from the township’s master plan. Pierce also worried about holding the developers accountable. Dylan Polasko recently moved to the area with her fiancé and says they are also concerned about the area becoming less rural. She told WHMI, "We moved to Lyon Township to have more trees, less traffic, and a smaller feel."

Ultimately, the Planning Commission voted to make a recommendation to the Board of Trustees to deny the proposal, citing deficiencies in meeting the Planned Development criteria and incongruity with the master plan. Fingeroot told commissioners he “respectfully disagreed” with the state of the plans, adding that he felt the team needed to hear feedback from residents and the Planning Commission to develop plans that met township standards. (DK)

Photo 1: Residents line up at the public hearing to share their thoughts.