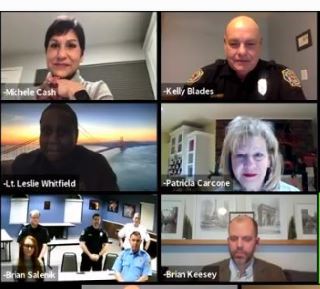 
Some promotions and new hires are taking place within the Lyon Township Fire Department.

Various appointments were approved during the recently held virtual meeting of the Lyon Township Board. Fire Chief Ken Van Sparrentak reported the department recently lost four positions at the fire officer rank in paid-on-call, so they’re going through little bit of a restructuring. He said they conducted oral interviews for the new position of assistant chief with candidates first evaluated by two external fire chiefs while second interviews took place at the township hall with two board members. Based on the outcome of both interviews, Van Sparrentak said his recommendation was to promote Reggie Madeline as the new assistant chief.

Van Sparrentak said Madeline is a longtime resident and will be a tremendous asset from both administrative and response perspectives immediately. He noted Madeline will provide immediate resolution with emergency response and departmental organization, adding he’ll be a long-term asset to the department and community and he fully recommends his appointment. Madeline’s official full-time start date will be beginning on Tuesday, February 16th.

Sergeant badges were pinned on both Blades and Salenik, who is also a sheriff’s deputy in the township. Board members offered congratulations to everyone, saying their hard work and service is very appreciated and they’re pleased to have people like them part of the department.