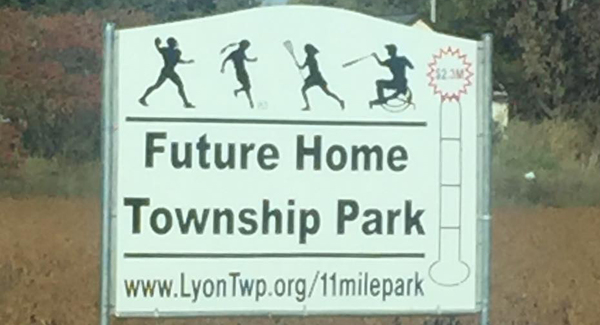 Plans for a community park in Lyon Township include several multi-purpose fields and an amphitheater.

A conceptual layout for 11 Mile Park was discussed at the township’s Board of Trustees meeting Monday. The approximately $2.2(m) million project is set to be located at the northeast corner of 11 Mile Road and Milford Road. Township officials and the Friends of the 11 Mile Park group are working together in developing the park so it appeals to a variety of ages and recreational interests.

Currently the park is expected to include play structures, a baseball field, three multi-purpose fields and an amphitheater. Township Engineer Leslie Zawada told trustees the baseball field planned for the north end of the park has been expanded to accommodate adult leagues, while an east to west multi-purpose field was eliminated during committee discussions and replaced with an amphitheater.

A large piece of land to the east of the amphitheater remains empty on the conceptual plan. Township Treasurer Patricia Carcone says there are a variety of ideas for using that space, including a senior fitness center, skateboarder’s park or flooding the storm water detention area as an ice skating rink.

Residents attending Monday’s meeting offered some suggestions to keep in mind during the park’s design process, like ensuring space for sufficient parking and room for food trucks. The board showed interest in a large public meeting that could include other township officials and are working to schedule one for later this month or next. (DK)