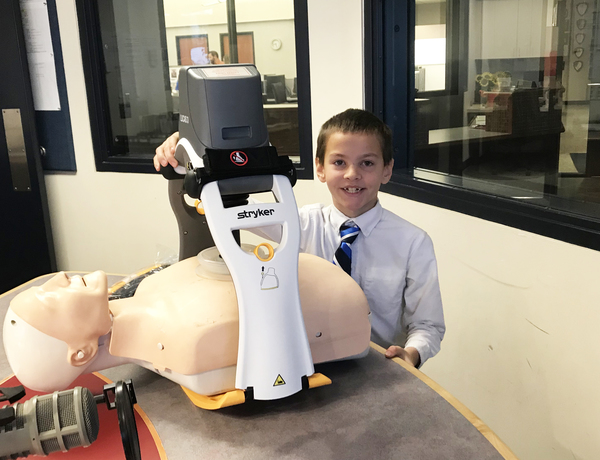 In record time, an area boy has raised enough money to purchase a life-saving device for the Howell Area Fire Department but he isn’t stopping there.

In almost exactly 5 months, 9-year-old Lucas Vetter has raised enough money for the department to get a second LUCAS Chest Compression System. It provides continuous chest compressions, freeing up firefighters and paramedics for other life-saving tasks while at an emergency scene. Lucas’ dad is one of the contractors that worked on the expansion to the department’s main station on Grand River and earlier gave his son a tour of the facility. The Rose Township boy was able to witness the device in action, which is what inspired his fundraising journey. After the tour, he went home and used a marker to draw up a business plan on a piece of construction paper to raise the $16,000 needed to purchase one of the devices. He started fundraising last October and was able to raise $6,000. Just last week, the Buhr Foundation in Ann Arbor agreed to donate the remaining $10,000. The small family foundation went further though and told Lucas if he continued with his fundraising efforts, it would pay for half of the cost for the second and third devices for the department. The Howell department currently has one machine and Lucas plans to keep fundraising for the third and fourth so there will eventually be a device installed in each of the department’s four stations.

Lucas told WHMI after the tour at the department, he immediately became “insanely impressed” with how amazing the device was, how it worked and helped the firefighters so much. He said the fundraising aspect was very nerve-wracking in the beginning but after he started doing it, he got the hang of it and it wasn’t as hard as he thought it was going to be. Details are still being worked out as to how the device will be presented to the Howell Fire Department but a formal announcement will be made during the 4th Annual SaveMiHeart conference this Friday at the Livingston County EMS Complex off Tooley Road in Howell Township. Lucas’ mother Kerry says it’s a pretty big achievement, one of the doctors who helped create the device, Dr. Hans Friberg, will be coming all the way from Sweden. She Lucas has been busy coming up with a power point slide show and they’re excited to announce how Lucas has been able to raise enough funds for one LUCAS device but is now on a roll to raise more funds for the others.

Details about Lucas’ fundraising efforts and how to donate can be found through ther providewd link. Those interested in donating can also email: lucasforlucascpr@gmail.com. (JM)