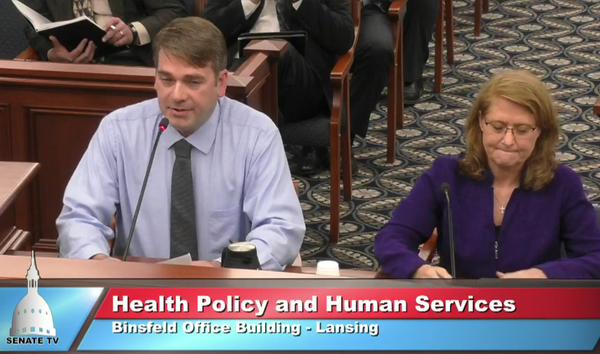 A local resident testified Thursday in Lansing in support of a resolution trying to being public awareness to a disease that could affect more than two million Americans.

The National Academy of Medicine says Myalgic Encephalomyelitis, also known as Chronic Fatigue Syndrome, is "a serious, chronic, complex, and systemic disease that frequently and dramatically limits the activities of affected patients," leaving many home or bedbound. It’s believed as many as 2.5 million Americans suffer from the disease, more than 41,500 of them Michigan residents. Among them is Brian Shuell of Brighton Township. After being unable to work for several years as a result of ME/CFS, he has since become an advocate fighting for awareness of the disease, which he says is severely underfunded.

On Thursday, Shuell testified in front of the Senate Health Policy and Human Services committee. State Senator Lana Theis of Brighton Township introduced a resolution (posted below) on his behalf and testified alongside him to the committee, of which she is a member. The resolution recognizes ME/CFS as a, “tragic, disabling disease that destroys the lives of many patients and takes a severe toll on their families, friends, and caretakers” while affirming the state’s commitment to improving the availability and quality of medical and supportive care for ME/CFS patients. It also recommends that the National Institutes of Health increase funding of ME/CFS research while encouraging universities in Michigan to focus research attention on the disease. On the federal level, Congresswoman Elissa Slotkin also signed on to two letters of support for funding increases.

Authorities say ME/CFS persists for years or even decades because of a lack of treatments, leaving one quarter of patients homebound or bedbound. Many students with the disease are unable to attend school, and 50 to 75 percent of ME/CFS patients are unable to work, resulting in an annual economic burden in America of $17 billion to $24 billion in medical expenses and lost productivity, $9.1 billion of which has been attributed to lost household and labor force productivity. The National Academy of Medicine has noted a lack of knowledge about the disease due to a "paucity of research" and "remarkably little research funding," and concluded that "more research is essential.” It also has noted that the medical community "generally still doubts the existence or seriousness of this disease," and patients have difficulty being diagnosed or accessing quality medical care.

Sunday is ME/CFS Awareness Day and Shuell says there will be a social media campaign that day to highlight just how many people are affected, with participants using the hashtag #MillionsMissing to demonstrate how the disease has forced sufferers to abandon their careers and passions. Shuell will also be a guest this Sunday on WHMI's Viewpoint program at 8:30am.

A link to a 2015 report from the National Academies of Medicine (previously known as the Institute of Medicine) about ME/CFS is below. (JK)