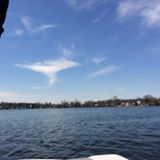 Hundreds of gallons of raw sewage spilled into a local lake because a local contractor allegedly failed to call the proper authorities ahead of his work. The Genesee County Drain Commissioner’s Division of Water and Waste Services is reporting that 800 gallons of raw, diluted sewage was spilled into Lobdell Lake in Argentine Township, Monday.

According to MLive.com, a contractor installing a seawall on Stages Island broke a shut-off valve with an excavator, causing the accident. The Drain Commissioner’s office said the contractor had not called Miss Dig prior to beginning work. The break was 4 feet below ground level, and in an effort to locate it, sewer water and infiltration from the lake through the existing seawall had to be pumped out of the hole and into the lake. The Drain Commissioner’s office said the contractor was completely at fault, and that a call to Miss Dig would have prevented the sewer line break and associated discharge entirely.

Genesee County established a “Gold Shovel Standard” in 2018, emphasizing the need that contractors establish safe working conditions and practices. Genesee County Drain Commissioner Jeff Wright said that both local communities and private contractors must work together to ensure agencies like Miss Dig are consulted prior to work being performed. Wright added that the stakes are simply too high, and the public health and peoples’ lives depend on the appropriate precautions being taken.