Livingston's Growth Highlighted at State of the County Address 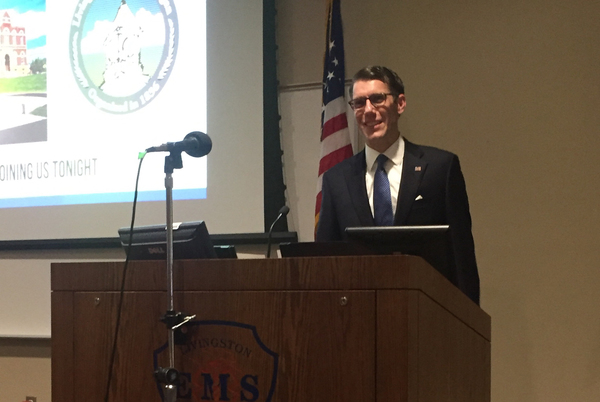 Livingston County’s strengths, weaknesses and goals were shared at the 2018 State of the County Address, bringing together this year’s theme of “Building on Success”.

The address was given by Don Parker, chairman of the county’s Board of Commissioners, at the John E. LaBelle Public Safety Complex in Howell Monday. Parker spoke of how far the region has come since the Great Recession, noting a significant increase in Livingston County’s population and its standing as having one of the lowest unemployment rates in the state. Parker says the county is strong fiscally, once again passing a balanced budget, achieving a AAA bond rating and making an additional payment to reduce unfunded pension liabilities.

Assets that are expected for the county this year include the development of Fillmore Park in Genoa Township and groundbreaking for Central Dispatch’s new facility. The county has already seen growth through the development of healthcare facilities, such as the Ascension Medical Center on Latson Road and the expansion of the St. Joseph Mercy Brighton health center. The University of Michigan’s Brighton Health Center for Specialty Care is expected to open this year and IHA recently announced plans for a $5(m) million facility on M-59.

Having shared the investments into public health care, Parker took the opportunity to draw attention to some of the county’s biggest challenges, which are also in the realm of public health care. Parker says entities and agencies throughout the area are working together to combat the opioid epidemic and the regional Hepatitis A outbreak through educational and proactive measures.

Parker addressed the issue of roads and says the county is being good stewards of related funds. Parker assured the community any Act 51 money the county receives from the state goes directly to the Livingston County Road Commission in its entirety.

With the highest household median income and lowest allocated tax rate in the state, Parker says he’s “very optimistic” about the future of Livingston County. Parker says he knows Livingston County is a desirable community to be a part of as it’s on track to becoming the 10th largest county in the state. With that growth, Parker says the county’s leaders will continue to bring fiscal restraint, the ability to make tough decisions and will do what is best for residents. (DK)