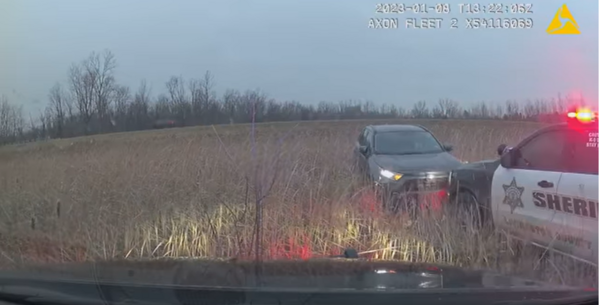 
Video has been released of a Livingston County Sheriff’s Deputy performing a driving maneuver to stop a fleeing vehicle from heading in the wrong direction on I-96.

At approximately 8:20am Sunday, Deputies attempted to stop a vehicle displaying a stolen registration plate while traveling westbound on I-96 near M-59 in Howell Township. The Office says when the deputy activated emergency lights, the 2021 Toyota Rav4 accelerated in an attempt to flee from the deputy reaching speeds over 100mph.

A Fowlerville Police Department officer was in position on westbound I-96 about a mile west of Fowlerville Road to deploy stop sticks. When the suspect observed the Fowlerville patrol car, the Toyota cut across the median to avoid the stop sticks.

The Toyota began to travel westbound in the eastbound lanes of I-96. Deputies followed the Toyota through the median and immediately performed a PIT maneuver (precision immobilization technique) to stop the vehicle from traveling in the wrong direction on I-96. The vehicle went into the median and came to a stop.

The Office says the 34-year-old male driver from Detroit was taken into custody without further incident.

There were no injuries sustained in the maneuver and the vehicles sustained minor damage.

This incident remains under investigation. A link to the video is provided.