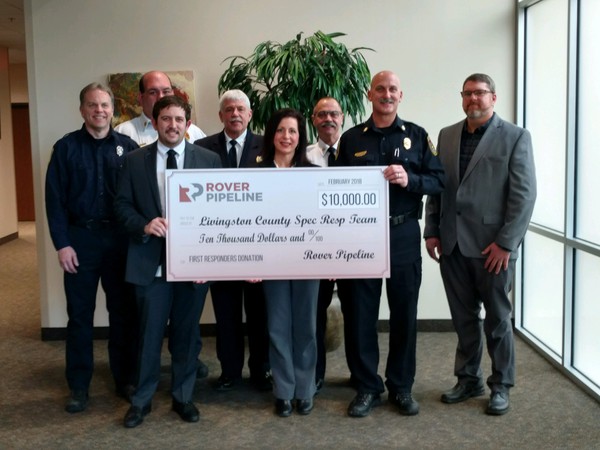 Livingston County has received a $10,000 donation from a pipeline company that will ultimately benefit a special response team.

Donations were made to each of the three counties traversed by the pipeline in Michigan - Livingston, Washtenaw and Lenawee. The funds will be used by the departments to purchase new equipment, perform additional training, or for any needs that benefit the first responders in each perspective county. The local event was held at the John E. LaBelle Public Safety Complex in Howell Township and the funds are being designated to support the Livingston County Technical Rescue Team. Energy Transfer Spokeswoman Alexis Daniel tells WHMI they’re excited to offer the donations to the local EMS agencies across the project areas but also work with them as they get into full operation. She says they’ve heard concerns but also what might be needed to support the local communities for a variety of emergencies, so the donations are available to support whatever they might need.

Livingston County Emergency Manager Therese Cremonte says this is really a great opportunity for Livingston County and local first responders. The funds will go to the Special Response Team, which will utilize it for various special responses such as hazardous materials or trench rescue. She says first line responders really need the funding because it’s difficult to come by and they always need equipment and training, including personal protective equipment they wear on scene.

All of the fire departments in the county have participating members on the Livingston County Technical Rescue Team, as well as EMS and the Sheriff’s Office, which mostly does dive-type rescues. Howell Fire Chief Andy Pless says it’s a county-wide rescue team that does several different things ranging from hazardous materials, technical rescue such as trench rescue and high angle rescue, as well as do dive and water rescues. He says the team will use the funds for hazmat and technical rescue, possibly some air monitoring equipment and other equipment. Pless says the funds will also allow them to do some training that will help with any kind of emergency response to a pipeline emergency.

Daniel says they’re excited to finally wrap up construction, put critical infrastructure in place and be able to transport reliable natural gas – noting the total pipeline project that spans from Pennsylvania, West Virginia and Ohio is more than 99% complete. The majority of the physical pipeline is in the ground and the restoration process will be completed in the spring. Daniel says what remains are HTD’s or horizontal directional drills, which are more than 83% complete. In areas where there is a road, river, wetland or stream, Daniel says the horizontal directional drill is the more environmentally friendly way to perform putting the pipe in because it actually drills underneath those, meaning less disruption. As they finish the drills and do the final tie-ins, they’ll be able to complete the full project. As for the final drills and tie-ins in Livingston County, Daniel says those should be finished by mid-to-late March and then restoration work will be taking place in the spring.

While the donations were said to be offered in goodwill by the company, those impacted by the pipeline project feel otherwise. Pinckney resident Clifford Rowley lives adjacent to the pipeline and tells WHMI the donation is essentially blood money that can nowhere near prepare counties for the potential catastrophic risks and damages now imposed upon residents and Michigan’s beloved environment. He says “more practically, unless we have a fleet of water bombers on quick alert status nearby the potential of a Dresden or a Tokyo level firestorm - yes, WW II level destruction - has now been imposed upon the communities of Pinckney and nearby Silver Lake with minimal safeguards.” (JM)