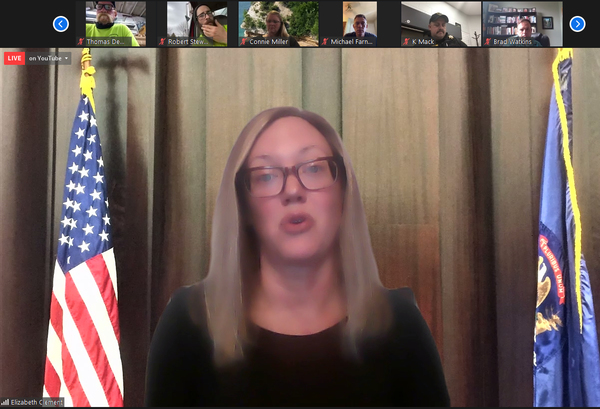 
Mentors with the Livingston County Veterans Treatment Court Program were recognized during a special virtual event on Wednesday.

53rd District Court Judge Shauna Murphy presides over the specialty court, which officials say has been very successful in part due to the strong mentors involved. She commented that last March with almost no notice the court transitioned to a virtual format during the COVID-19 pandemic. Murphy said judges and court staff have continued to work in person at the courthouse out of necessity and are now in their second year of holding veteran court sessions and nearly all other court hearings in a virtual format. She said over the last year, the Veterans Treatment Court team and mentors have worked tirelessly to safely provide the highest level of support to veteran participants during these most challenging times. Murphy added it’s with great hope they look forward to a pandemic-free future when they can return to meeting in person and holding in-person court sessions again.

Judge Murphy thanked the Veterans Court team, participants and court staff for their perseverance and dedication to the specialty court despite an ongoing global pandemic – noting not a single session has been missed.

The event coincided with April as National Volunteer Month and featured Michigan Supreme Court Justice Elizabeth Clement as the special guest. Clement said she believes the time that mentors are giving back to members of the military is truly saving their lives. She commented that veterans were previously in regular problem-solving courts and were really struggling but when they started creating programs specifically for them, they saw success they weren’t seeing in traditional programs and it’s because of mentors.

Clement commented they get contacted by states across the nation for advice and counsel on how to get similar programs up and running. She said Michigan is the national leader in Veteran Treatment Courts with 27 programs that have shown success. Clement noted that unemployment among veteran graduates has dropped by 81%. She says of the 263 veterans discharged from a program, 193 participants or 73% have successfully completed a program. Clement further stated that the veteran courts have retained 90% of their participants over a 12-month period – which is a very strong indicator of program success.

In addition to the mentors, Clement said they couldn’t have such success without judges stepping up who see a need for the program in a community and are willing to be the leader – which is in addition to their regular dockets and already very busy days. Clement specifically recognized the work being done in Livingston County, saying others don’t have such robust programs and really struggle and the local program serves as a model.

Clement said it has been a very challenging year for all courts but especially problem solving courts because one of the pieces of the problem solving courts are bringing participants in and having face to face communication with the court and team. She noted those courts had to pivot and change their way of doing things and she’s very proud of how they did that – commenting it was bumpy at first with learning Zoom and holding remote hearings but they’ve heard from across the state what tremendous success they’ve been able to accomplish during the pandemic to make the change and stay involved and committed to all of the veterans.

Chief Livingston County Judge Michael P. Hatty commented the specialty courts serve a really special population and do it well – noting there are very good rates of success and very little recidivism and that speaks to the program. He further noted that Judge Murphy took the program over when she was appointed to the bench and has made the program soar since then.

All of the volunteer mentors of Livingston County veterans will receive a copy of a proclamation from the Michigan Supreme Court justices extending their sincere and grateful appreciation for their dedicated service to their clients and the state but also best wishes to current participants and past graduates for their continued success in the years to come.