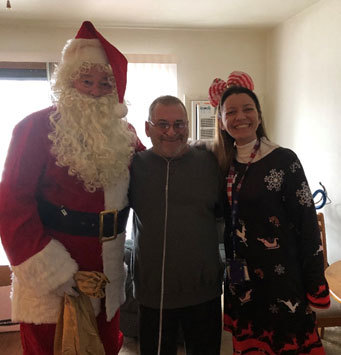 Livingston County Veterans’ Services helped to make the holidays a little brighter for some local veterans.

As many organizations focus on families with children, the department felt there was a certain demographic getting overlooked so an idea was conceived in the office to help coordinate local veteran groups with families for the holidays. Director Mary Durst says it was a good year for generous donations from local individuals and organizations, and office staff had grown close to the veterans they had helped throughout the year. She says it was decided that every employee would pick one to two veterans that they worked with this year that left a lasting impression on them. Each employee then hand-picked presents for each of their veterans with information they had learned about them during the course of the year. Staff members delivered the presents to their respective veterans with the help of Santa, played by Benefits Counselor, Ron Blackwell.

Dena Daher, one of Livingston County’s Veterans’ Benefits Officers, said there were plenty of smiles and tears. She added one comment was made by a veteran that she hasn’t opened a gift on Christmas in years so this was a touching and fun way of bringing happiness to the veterans and saying thank you for your service. The project was also said to a huge hit with the office staff as well. Durst said “It was nice getting out into the community and surprising our veterans. Seeing the shock and then smiles on veteran’s faces when Santa was calling their name was priceless and was great for office morale while building the holiday spirit". Durst said the entire experience was very rewarding and as long as the department has the funds, they plan to make it a yearly tradition.

Veterans’ Services is available year round for any and all veterans and dependents living in Livingston County. More information can be found by calling 517-546-6338. (JM)