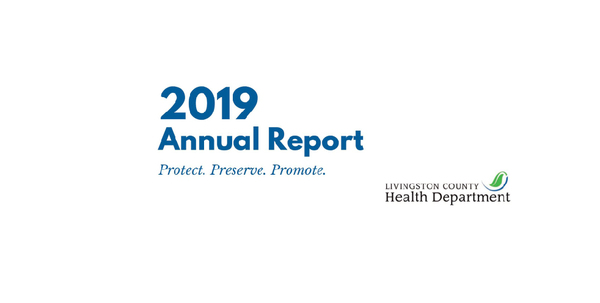 
PFAS contamination, air quality issues, mosquito transmitted viruses and communicable diseases were just some items that marked 2019 for the Livingston County Health Department– and that’s not including the coronavirus pandemic officials are currently dealing with.

Department heads presented the 2019 annual report to a sub-committee of the Livingston County Board of Commissioners at a recent virtual meeting. Commissioner Kate Lawrence commended the department and entire team, saying it has certainly been tested with one issue after another this year. She added the department and team have handled everything with professionalism and grace while keeping the community informed, thinking everyone for all of the extra work and turmoil they’ve been through. Health Officer/Director Diane McCormick commented that when compiling the report and looking back on the past year, there were a lot of “oh-mys”. Various themes in the 2019 annual report included community outreach and engagement, awareness of environmental issues, collaboration efforts, disease surveillance activities and efforts to improve health outcomes in Livingston County.

Director of Environmental Heath Matt Bolang commented it was a very interesting year. He gave an update on PFAS contamination, Swine Flu response, the Eastern Equine Encephalitis or EEE mosquito issue and the large response to air quality issues from Diamond Chrome Plating in Howell.

Bolang highlighted the discovery of PFAS contamination in fish and water systems within the Huron River system in late 2018 that continued into 2019. He reminded that a “do not eat fish” advisory is still in effect for the local Chain of Lakes area chain and the river system at large. He said things are looking better but more data is being collected and the hope is that restriction can be revised in the next few years. Boland also noted the air quality issues with Diamond Chrome Plating in Howell in which elevated levels of Trichloroethylene or TCE were being released from the building into outdoor air above health limits. He says the company has stopped using TCE and switched to alternative degreasing products and air monitoring showed levels below limits. The department continues to be involved with the state on additional environmental compliance issues and further air monitoring.

As for the EEE mosquito issue, Bolang noted there were more cases in Michigan last year than they generally see in an entire country. There were no human cases confirmed locally but a positive 3-year-old unvaccinated horse was identified in Hamburg Township – which indicated the types of mosquitoes that transmit EEE were present in the county. That resulted in aerial spraying efforts in parts of Hamburg and Green Oak Townships near the area where the horse was identified to reduce the risk of exposure and transmission to the public. Bolang said the department continues to do mosquito monitoring and trapping, and is also looking for those that could carry the Zika virus.

Deputy Health Officer/Personal & Preventive Health Services Director Elaine Brown highlighted communicable diseases, saying there are over 70 they’re required to report and follow up on. She says protocols are also very similar to very similar to COVID-19 in that they perform surveillance, case outbreak investigation, contact tracing, education treatment and immunizations if applicable. The department also does case investigations related to food borne illness such as salmonella and E.coli. Brown said they are seeing cases of Legionnaires disease and one case in a hospital is required to be reported. As for Meningitis, she said the county has seen more viral or asceptic types versus bacterial, which is good. Brown said the department sees about 400 cases a year that they follow up on. Brown added that Pertussis and Shingles are now vaccine preventable diseases and they encourage everyone to get up to date on all vaccinations due to COVID-19 – adding there will be a strong push for influenza vaccines this season.

Brown noted that in 2019, the state mandated that animal bites and bat exposure cases be reported so they’re working with urgent care facilities and hospitals to report those. When it comes to Ticks, the majority seen locally are dog ticks but it was noted there have been a few individuals test positive for Lyme Disease. There were only a handful last year but officials said the county is in the zone now and on the map.

Also featured in the report was the My Community Dental Center, which opened in 2017 and is said to be thriving. It provides services to Medicaid enrollees and low income, un-insured county residents. The center in Howell was one of a few that has remained open for emergency services during COVID-19.