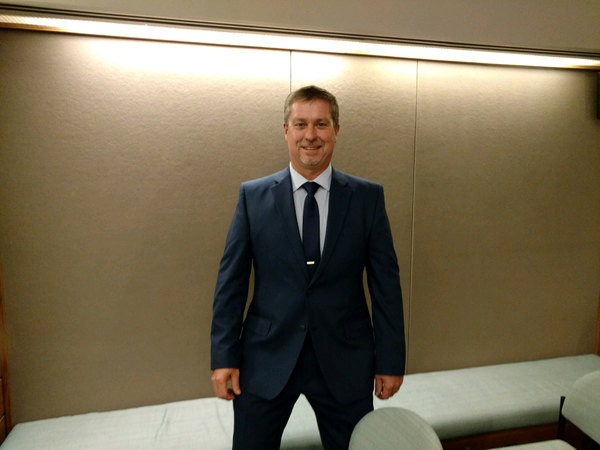 The Livingston County Board of Commissioners met Monday night and approved hiring a new EMS director.

The Livingston County Board of Commissioners met Monday night and approved a resolution to make a conditional offer of employment to David Feldpausch. He’s the current director of Montcalm County Emergency Services and brings 27 years of experience in EMS. A company provided candidate recruiting and screening assistance before a panel of county officials interviewed the top two candidates before selecting Feldpausch. Acting Livingston County Administrator Cindy Catanach noted that when given scenarios by the interview panel, Feldpausch “nailed it” in every single area he would suggest to make improvements and they were very impressed. Feldpausch commented during the meeting that numbers are his specialty and it was also a very intensive interview process.

He has spent the last 12 years as EMS director in Montcalm County and says it’s a very similar position, although he also held the dual role of emergency manager. Being there so long, Feldpausch says he’s very familiar with county government operations, budgets and the process so that helps make the transition a little easier. He tells WHMI Montcalm is smaller and more rural than Livingston but has many of the same issues and challenges that face EMS everywhere so he’s both humbled and excited for the opportunities and challenges ahead. In Montcalm County, Feldpausch says they’ve taken the method of growing employees. He says you always want people to keep long term, which means getting young people and he thinks it’s also huge to start getting get into high schools. Feldpausch says they started an EMT program at the high school level in Montcalm County to try and capture those individuals with an interest in the medical field right out of high school and give them the opportunity to grow. Some will use it as a stepping stone to move on to something bigger and better but he says that’s ok because they’re great people and will remember you down the road, and support and take care of you. Feldpausch said he comes from a much more rural setting that’s much more economically deprived than Livingston County so he’s looking forward to coming here with a lot more resources to work with and just see what he can do to keep the great tradition of Livingston County EMS alive.

Feldpausch says there’s no formal start date but sometime after the 1st of the year because you don’t replace a department head overnight and he needs to give notice to Montcalm County. He replaces longtime EMS Director Jeff Boyd. He was placed on unpaid leave October 17th by county officials who have said that the action was part of a “precautionary investigation and record review…related to documentation within the education function of the department.” The Michigan Department of Health and Human Services has confirmed that Boyd is the subject of an active investigation along with Joseph Hahn, who had been the department’s Education Supervisor. Hahn was fired by the county October 4th following an internal investigation but is currently appealing an order by the MDHSS to revoke his license. It’s alleged that Boyd was one of the employees who received an Advanced EMT certification without attending the course. Boyd has declined to comment. He was set to retire by the end of the year after more than 30 years of service to the county.

Prior to voting to hire Feldpausch, the board also adopted the 2020 budget at Monday’s meeting. Chairman Don Parker informed the public that the county is feeling a bit of a “cash crunch” in the EMS department but stressed that they are on top of it and it’s nothing to be concerned about – adding service will not be interrupted or disrupted in any way. (JM)